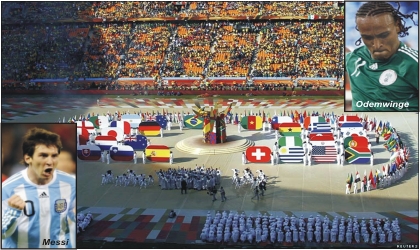 Nigeria’s Super Eagles go into today’s Group B’s opening match against Argentina, knowing that it is a crucial encounter that can shape their fate in the nascent 2010 World Cup.

From World footballer of the year, Lionel Messi, Gonzalo Higuain  of Real Madrid, Manchester City’s Carlos Tevez, Javier Mascheramo of Liverpool to Juan “Sebastian Veron, the Argentine team is loaded to the hilt.

The question on the lips of many observers has been, how will Nigeria cope with Star-studded Argentina.

Can Messi be stopped? Can the Super Eagles survive the attacking machine of Diego Maradona’s team?

However, pre-match ratings will count for little when hostilities begin today.

The Super Eagles are looking to have a positive beginning to the championship and have vowed to match the Argies man to man.

Apart from the points at stake, Nigeria will also be looking to exert sort of revenge on Maradona and his troops after losing to them twice at the World Cup, at USA ’94 and Korea/Japan 2002, the World Youth Championship in 2005 and the 2008 Beijing Olympics.

Interestingly, about 10 members of the Super Eagles have played against the Argentines at various levels and know what to expect today.

Both teams struggled in their qualifying campaigns but since, they have undergone some transformations.

While Messi will be hoping that he rediscover his club form for his country, Nigerians hope that Swedish Coach, Lars Lagerback has been able to improve the Super Eagles’ game, especially, team tactics and discipline.

Most Nigerians believe that beating Argentina today is not impossible but the Super Eagles must raise their game to optimum level, especially in defence, while the attack line expected to be led by Osaze Odemwingie, Yakubu Aiyegbeni an Obinna Nsofor piles enough pressure on the Argentina defence.