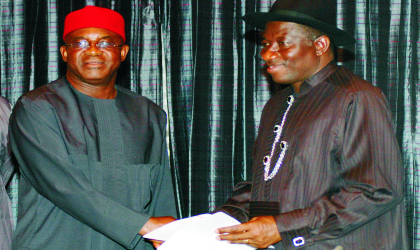 President Goodluck Jonathan (right), receiving condolence and congratulatory letters from the Senate President, David Mark, during the visit of Senate Leadership to the President in Abuja,yesterday. Photo: NAN

The embattled former Governor of Delta State, Chief James Onanefe lbori would soon be extradited to the United Kingdom from Dubai where he is currently being held as formalities between the two countries are almost complete.

The media is already awash with reports that James Ibori may not be extradited at all as according to them there is no existing treaty between Nigeria and United Arab Emirate (UAE) to extradite the fugitive former Governor. Ibori is believed to have put up a Iegal defense team In Dubai to frustrate the extradition process.

But under the existing extradition Treaty series number six of 2008 between the UAE and Great Britain/Ireland, the London Metropolitan Police working with the police in Dubai have almost completed the necessary papers that would move Ibori to London to answer charges bordering on money laundering and fraud.

Sources at the Foreign and Commonwealth office in the United Kingdom  confirmed   that the existing treaty between UAI and Britain on extradition was enough  to move lbori to London within the week and that both the Dubai Police and the Met Police are almost through in their exchange of documents through diplomatic channels.

The will sought to know whether the Met police and Dubai Police were facing challenges regarding Ibori’s extradition to the United Kingdom, but the source confirmed that “I can assure you that the treaty is perfect enough to accommodate Mr. Ibori from Dubai and in a matter of days he Will be in London.”

Article 2 section (a) of the Treaty, extradition may be granted in the following cases “if the conduct on which the offence is based is punishable under the laws of both parties by deprivation of liberty for a period of  at least one year or by a more severe penalty”, and section (b) of Article says.

Meanwhile operatives of Nigeria’s Economic and Financial Crimes Commission (EFCC) have arrived Dubai to assist both the Dubai Police and the Met Police in concluding the exchange of papers and other diplomatic documents that would quickly push lbori to London.

Spokesman of the EFCC told newsmen in Abuja that the operatives are already in Dubai but declined to say whether Ibori would subsequently be brought to Nigeria at the end of his prosecution in London.