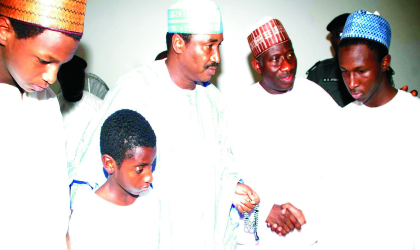 Following the swearing-in of former Acting President, Dr Goodluck Jonathan as the substantive president, a man of God who had prophesied about his elevation in 2007, during his tenure as Bayelsa State Governor, has called on the new Nigerian leader to be steadfast as he is divinely placed.

Also, he said that Dr Jonathan’s tenure would reverse the fortunes of the country for good, but noted that before the country would enjoy these goodies, the new president has to seek God’s face in all his policies.

Evangelist Godswill Ekeke, who had in The Tide On Sunday edition of March 7, this year, related how he saw a vision over Jonathan’s ascendancy to the nations highest post four years ago, said the late Yar’Adua’s health controversy was a divinely orchestrated plan to elevate Dr Jonathan, nothing that no matter the odds, the new president would succeed to become the nation’s number one citizen.

According to him, within this period of Dr Jonathan’s presidency, Nigeria would witness peace and abundance.

‘I see Nigeria becoming a place of honour. Nigeria would enjoy friendly relations with foreign countries and this would attract a lot of foreign investors”, Evangelists Ekeke declared.

With the economic prosperity, he remarked that poverty reduction would be greatly achieved by the administration.

The man of God advised Dr Jonathan not to be bothered by political detractors but rather should do the will of God. “His rulership would be a great dominion so he should always seek the face of God”, Ekeke asserted.

The man of God, therefore, called on the citizenry to give the Jonathan led administration the necessary support as God has ordained him to lead the country out of the wood.

It would be recalled that in February 2007, the Oyigbo Local Government Area born prophet had mailed his divine message to Dr Jonathan then governor of Bayesla State.

The letter further declared, “ Sir you must be the president of Nigerian the same way you were made the executive governor of Bayelsa State, this is God’s plan for you”.

Requiem For President Yar’Adua …Sad Exit Of A Servant Leader