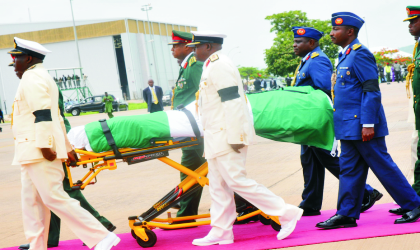 The late president was laid to rest in his family home in Kastina State. Acting president Goodluck Jonathan has been sworn in as president.

In accordance with the Nigerian constitution, the acting president Goodluck Jonathan was, Thursday, sworn in as  president and Commander-in Chief of Nigerian Armed Forces at the council chamber of the Presidential Villa, Abuja by the Chief Justice of Nigeria, Justice Aloysius Katsina Alu at 9.20am.

Also at the ceremony were the Speaker of the House of Representatives, Hon. Dimeji Bankole, members of the National Assembly, Service Chiefs, as well as the Secretary to the Government of the Federation, Alhaji Yayale Ahmed.

Ministers, the Inspector-General of Police Ogbonna Onovo, PDP Chairman, Vincent Ogbulafor and members of the Diplomatic Corps were also in attendance.

Yar’Adua died from a protracted heart disease called acute pericarditis, the inflammation of the outer layer of the heart.

Yar’Adua came to power in 2007 elections which he himself acknowledged were flawed. The country’s Supreme Court finally ruled in December 2008 that he could stay in office, dismissing objections lodged by rival candidates. This meant Yar’Adua became the first civilian leader in Nigeria to take over from another.

Even before he was elected, there were doubts about whether Yar’Adua had the physical strength to reform the most populous country in Africa.

His health problems that dated to the late 1990s when he was governor of his native Katsina state forced him to travel to a German hospital on several occasions.

“My feeling is one of resentment for those who used him as a mere instrument for their diabolical political gains,” he said. “Yar’Adua should have been released from office ages ago to pay full attention to his health, but people who knew how ill he was refused to take the necessary steps towards preserving him in his last days as a human being. He was just used and I found it most disgusting.”

American President Barack Obama said Yar’Adua would be remembered for his personal decency and integrity, his deep commitment to public service, and his passionate belief in the vast potential and bright future of Nigeria’s 150 million people.

Indications that the ailing president may go the way of all mortals emerged last Thursday as he failed to turn up at  the mandatory Friday prayers, despite an invitation by leading Islamic preachers.

Meanwhile, tears and tributes have continued to trail Yar’Adua’s demise, Acting President Goodluck Jonathan said he received news of the passage of President Umaru Yar’Adua with great shock and sadness.

“Nigeria has lost the jewel on its crown, and even the heavens mourn with our nation tonight,” he said yesterday in Abuja.

In a statement issued by his Senior Special Assistant on Media and Publicity, Mr Ima Niboro, Jonathan described the death of the President as sad, unfortunate and regrettable.

“As individuals and as a nation, we prayed for the recovery of Mr President.  “But we take solace in the fact that the Almighty is the giver and taker of all life,” he said.

The statement quoted the acting President as offering heartfelt condolences to President Yar’Adua’s widow, Hajiya Turai Yar’Adua, the entire Yar’Adua family, the people of Katsina State and Nigerians both at home and the world over.

In his tribute, the National Chairman of the Peoples Democratic Party (PDP) Prince Vincent Ogbulafor expressed deep regret, sorrow and sadness over the demise of this great son of Africa”, adding “ one of the most glorious chapter in the history of Nigeria has suddenly drawn to a close”.

In their reaction, the All Nigeria People Party (ANPP)  and the Conference of Nigerian Political Parties (CNPP) applauded Yar’Adua’s insistence on the rule of law, transparency and accountability in governance.

Alhaji Balarabe Musa, CNPP National Chairman ,who is also the leader of PRP, said in Kaduna that “Nigeria has lost a leader who tried to entrench rule of law and electoral reforms”.

He advised President Jonathan to continue with the good works of his predecessor toward strengthening the institutions of government and restore people’s hope in the polity.

Meanwhile, APGA  condoled with Nigerians over the death of  President Umaru Yar’Adua, describing it as a great loss

The National Secretary of APGA, Alhaji Sani Shinkafi,  said that the party received the news of Yar’ Adua’s death with “great shock’’.

He urged the new President, Dr Goodluck Jonathan to rise to the challenges of moving the nation forward.

In his reaction, the National Publicity Secretary of the Action Congress, Mr Lai Mohammed, commended the swearing in of President Goodluck Jonathan to succeed Yar Adua, describing it as ‘’a smooth transition’’

‘’ We are glad that there has been a smooth transition as the acting president has been sworn in in line with the constitution. This has shown that Nigeria has towed the path of constitutionalism.’’

Mohammed described the late Yar’Adua as a straightforward and candid personality who shocked members of his party by his admission that the electoral process which brought him into office was flawed.

Obasanjo said: “I received the news of Yar’Adua’s death with heartfelt sorrow. “Our prayer is that God grants him repose and condole his family.’’

The former President spoke during a stop-over on his way to Beijing.

In his reaction, former military President, Gen. Ibrahim Babangida, said that Yar’Ádua was great in death, just as he was graceful in his life time.

In a statement issued by his spokesman, Mr Kassim Afegbua, Babangida said that Yar’Adua battled death like a valiant man, adding, “he represented our daily struggle in life’s bramble forest.’’

Babangida said: “It is pathetic and utterly painful; every death brings with it tears and pain and sorrow of grief and discomfiture.

Also speaking, Senate President David Mark described the death of Yar’Adua as a monumental loss to the nation.

A statement signed by his Special Adviser on Media, Mr Kola Ologbondiyan, quoted Mark as saying that Yar’Adua left a legacy of selfless service that would be difficult to rival. 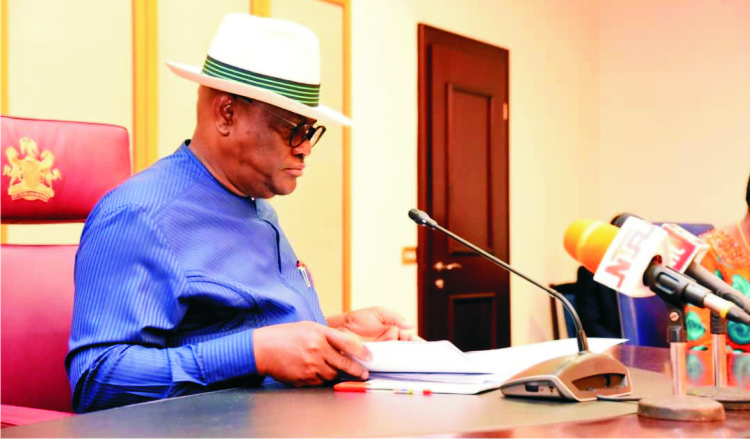 Rivers State Governor, Nyesom Ezenwo Wike has called on Rivers people no matter their political affiliation to join hands with his administration to build a stable and vibrant economy.

In a state-wide broadcast to mark the first year of his second term in office today, Governor Wike noted that the state can overcome the present global economic situation if citizens come together in unity of thought and purpose.

“Yes, we can if we resolve to downplay our individual differences and work together for the common good of our heritage, our lovely State, our communities and our people. As a government, we welcome constructive criticisms devoid of politics and mischief, because they serve to make us better performers.

“This is a time for governance, not politics,  and we welcome everyone on board to create an environment that promotes balanced economic growth, thriving private investments, boundless opportunity and a State we can truly call our pride and heritage.

“For us, nothing matters more than Rivers State, our people, our interests, our treasures, our enormous resources and assets, our accomplishments and our greatness,” he stated.

The Governor pointed out that within the last one year, his administration had embarked on urban renewal programme in the State capital and the construction of the multi-billion naira three flyover projects at Rebisi, Okoro-nu-Odo and Rumuogba.

The Oyibo(Mbano camp) road  to Iriebe linking Oyigbo and Obio/Akpor Local Government Areas had been completed while Alesa-Agbonchia-Oyigbo, Rumuakunde/Isiodu and the second phase of Isiokpo community Roads had also been completed.

In addition, the governor said, work has commenced on the expansion of the entire stretch of Ikwerre Road from Education Bus Stop to the Port Harcourt International Airport, Omagwa.

According to him, the long abandoned roads to the coastal communities of Opobo and Andoni in Opobo/Nkoro and Andoni Local Government Areas has almost been delivered with appreciable work already done on the Ogoni-Andoni-Opobo Unity Road.

On healthcare delivery, the governor said the Mother and Child Hospital has been furnished, equipped and only undergoing necessary testing and preparations for commissioning.

The Braithwaite Memorial Hospital, he said, has been fully equipped and converted to the Rivers State University Teaching Hospital (RSUTH) leading to the accreditation of the programmes of that facility for the training of medical students by the Medical and Dental Council of Nigeria.

Governor Wike stated that the regional referral hospitals in Degema, Bori and Degema are presently being equipped while structural work is on-going on the ones located in Omoku and Etche.

On Real Madrid Academy, Governor Wike announced that the construction of students’ hostels is progressing and that the school would soon open for simultaneous football and related training programmes.

He said in line with the promise to refocus on agricultural development, the Datco Cassava Processing Plant with a guaranteed off-market opportunities for 3000 local cassava farmers would soon be completed to stimulate cassava revolution in the state.

The governor regretted that despite the advisories and regulations on social distancing and compulsory wearing of face masks, most residents are flouting the directives to the collective peril of all.

“These are all irresponsible and risky behaviour in the face of the invisible and ravaging pandemic and the enormous threat it poses to public health and the safety of human lives.

“We shall bring the full weight of the law to bear on every recalcitrant person, business or institution, irrespective of status who decides to treat the existing orders and regulations for mitigating the spread of COVID-19 in our State with contempt.

“Government may be forced to reinstate lockdown if members of the public continue to flout and disregard the established regulations on social distancing and the compulsory wearing of face masks,” he said.

Governor Wike however, commiserated with the families of those that lost their loved ones to the pandemic and prayed for the peaceful repose of their innocent souls.

He said that while we pray for the quick success, for the global search, for vaccines, the responsibility still rests on everyone to strictly comply with the established mitigating measures.

A Statewide Broadcast By His Excellency Nyesom Ezenwo Wike, CON, GSSRS, POS, To Mark The First Year Of His Second Term In Office …My Dear Good People of Rivers State 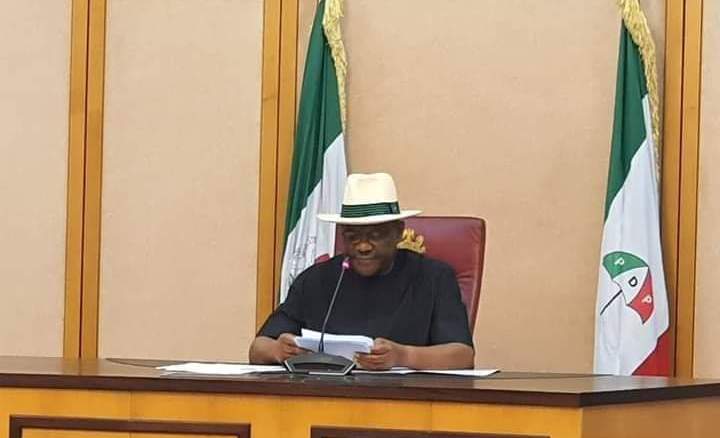 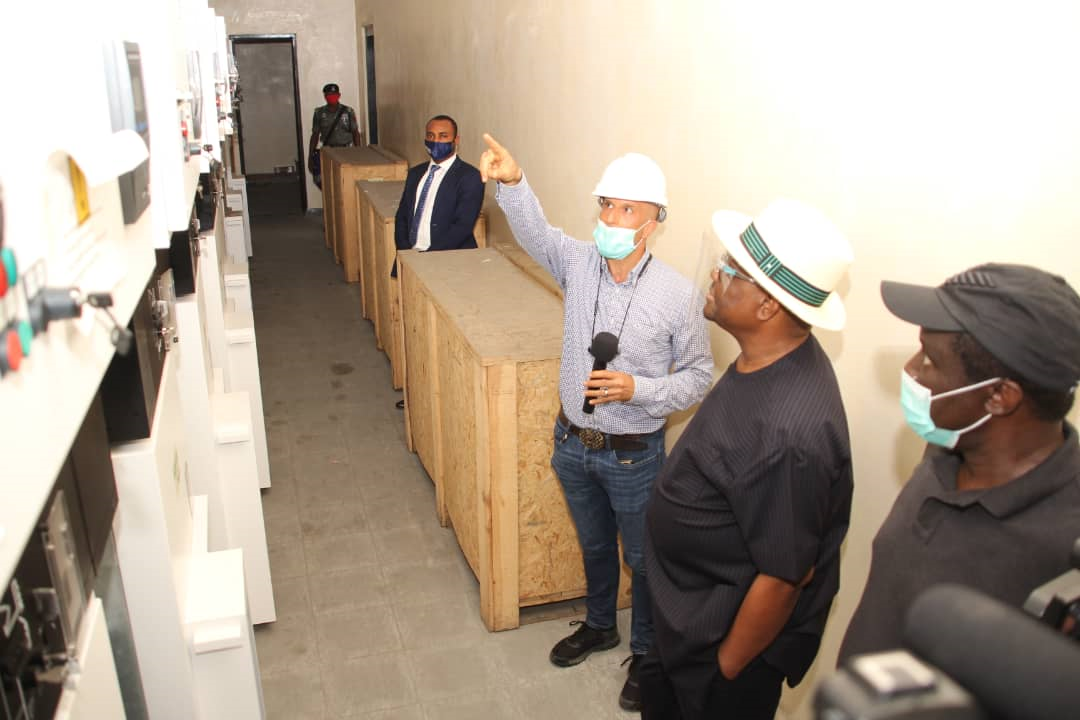 Governor Nyesom Wike who stated this Thursday after inspecting the plant, pointed out that the company when fully operational would employ 4,500 persons and also boost agriculture in the state.

He stated that the State Government has 70 percent equity share in the project which is in partnership with Shell Petroleum Development Company(SPDC) of Nigeria.

“We are quite happy that this project which was initiated by the previous administration in 2012 and abandoned has come to the stage of completion.

“When we came on board and saw the usefulness of this project to our economy, we did not hesitate to release funds to complete it.

“As you can see this  project which is about 90 percent complete would have been commissioned this month if not for the COVID-19 pandemic which has  negatively impacted global economy.

“Let me commend the management of this plant for  fast-tracking the completion and the novel initiative that will use mobile machines to collect cassava from the farmers at their various clusters.

“This, will no doubt, reduce the challenge of logistics and increase farmer participation, ” the governor stated.

Earlier, the Managing Director of the Rivers State Cassava Processing Company, Ruben Giesen noted that the cassava processing plant when completed would increase income for small holder farmers by providing an enabling environment for them to sell their cassava tubers.

Mr. Giesen commended the State Governor for embarking on the project, which he described as the first of its kind in sub-saharan Africa.