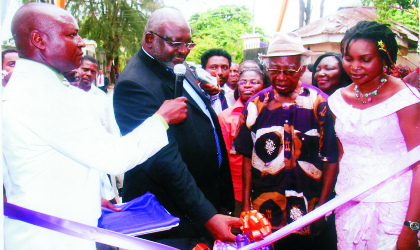 The Commissioner for Strategic Communications, Mr Adewunmi Abitoye, made the announcement yesterday in Kaduna shortly after officials of the commission paid a courtesy visit to Gov. Namadi Sambo.

He said the amount was immediately remitted to the Federal Government’s consolidated account.

Abitoye said that “ operating surplus” was the funds generated by corporate agencies outside the budgeted amount for a particular year.

The commissioner, who represents the west geo-political zone on the commission, said the agencies were expected to remit 80 per cent of such fund to the federation account.

He said the funds were recovered after the agencies failed to remit the excess funds to the federation account.

The Chairman of the Commission, Alhaji Aliyu Yelwa, said the commission members were in the state to sensitise government officials on the need to imbibe best practices to fast-track the socio-economic development of the area.

“We were established by an Act in 2007 to ensure standard practices for greater efficiency in allocation and management of public expenditure,” he added.

Yelwa said six state governments, including those of Lagos, Kebbi, Bauchi, Gombe, Abia and Imo were already implementing the fiscal responsibility policy to enhance productivity and transparency in their ministries.

He said the policy, if effectively implemented, would enhance equity in the distribution and application of economic resources.

Responding, Sambo said the state government had adopted various policies, including the Procurement Act, to ensure prudence in its fiscal applications.

Sambo, represented by Mr Waje Yayok, Secretary to the State Government, said government was collaborating with the World Bank and other institutions to ensure transparency in allocation of funds.

In another development, the Federal Ministry of Environment said it was set to commence “massive” awareness programme on climate change in the nine erosion prone states in the Niger Delta region.

Mr Yerima Tarfa, an Assistant Director, Climate Change Unit, of the ministry, told newsmen, Tuesday, in Abuja that the programme would take place in Calabar towards end of April.

Tarfa said that the programme would enlighten the people in the area about the threat and impact of the global phenomenon.

According to him, the programme wouldl witness the participation of people at the grassroots.

He said that another sensitisation programmme that would bring together people at the grassroots and stakeholders among others, would also hold in Gombe in May.

The assistant director said the ministry had organised several awareness programmes to educate the people about the implication of climate change, incliuding jingles and dramas.

“ We have done a lot in the area of creating awareness on the impact of climate change, through jingles on television, radio and drama among others.

“These are the channels through which we have been able to disseminate the information,” he said.

He, however, said that some stakeholders and NGOs, such as the Nigeria Climate Action Network (NigeriaCan) and Henrich Boll Foundation, were partnering with the ministry to create awareness at the grassroots.

“For the past three years, the Henrich Boll Foundation, one of our partners, had supported the unit in creating awareness on climate change especially at the frontline desert prone states,” Tarfa added.

Tarfa said that the government was driving a private public partnership programme to produce a National Adaptation Strategy and Plan of Action (NASPA), adding that the climate change unit had provided a secretariat for the NASPA.

Members of NASPA were NGOs and other stakeholders, he said, adding that the objective of the group was to create awareness about climate change and other related issues at the grassroots.