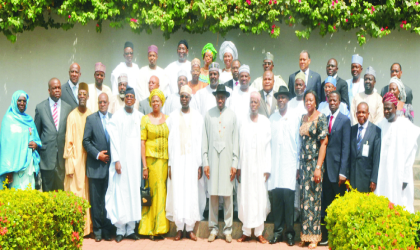 Acting President Goodluck Jonathan, poses with the new ministers after their oath of office in Abuja, yesterday. Photo: NAN

Governor Amaechi, who made the statement, Monday, during the swearing-in of the new Chairman of Ogba/Egbema/Ndoni Local Government Council, Mr. Raymond Wokocha at Government House, Port Harcourt, said council chairmen should account for how the funds meant for those sectors were used.

The Governor recalled that it used to be the responsibility of local government councils in the state to pay salaries of primary school teachers, renovate and maintain primary schools as well as the building and renovation of primary health centres before now, and wondered why there has been no significant improvement in the performance of councils even when the state has taken over such responsibilities.

“They used to pay primary school teachers’ salary, over Nl billion, we have taken that over, we paid with our own money, not their money, the question to ask is what happens to that money in their possession?”, the Governor queried.

Governor Amaechi, who emphasized that the state government would fully equip and employ its staff for the model health centres being built across the state, said the new bill on the management of the health centres stipulates that councils would continue to pay the salaries of their old health workers.

The state chief executive charged the new ONELGA Chairmn to serve with the fear of God and utilize the resources of the council to impact positively on the lives of the people to avoid what led to the removal of his predecessor.

He told the Chairman that if he serves his people well without enriching himself to their detriment, he would have good will that could open many doors for him, challenging him to take stock of all those who have been Council Chairmen in the area and consider their present political and economic condition.

Speaking to Government House Correspondents shortly after the ceremony, the new chairman of Ogba/Egbema/Ndoni Local Government Council said the focus of his administration would be on the proper utilization of funds to impact positively on the people and fight corruption.