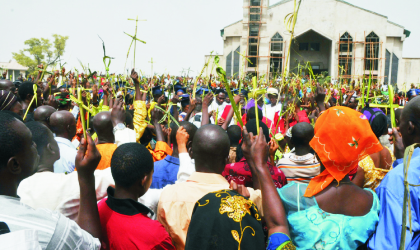 The upper chamber of the Nigerian National Assembly will, today, commence the screening of the list of 33 ministerial nominees forwarded to it last week by Acting President Goodluck Jonathan.

Chairman Senate Committee on Information and Media, Senator Ayogu Eze disclosed this in an interview with newsmen in Abuja.

Senator Eze who said that the screening will commence at noon noted that it would be broadcast live.

He described as false, reports that some Senators are targeting some of the nominees, adding that each of the nominees will be judged by his or her presentation.

The list which includes 21 former members of the dissolved executive and 12 new ones will be subjected to a gruelling session with the federal lawmakers to ascertain their preparedness to occupy cabinet positions in this crucial part of the nation’s development.

Already, pundits have started speculating on who of the 33 members will eventually make the ministerial list, by getting the nod of the senators .

One name that keeps recurring among political circles is former Information and Communications Minister, Prof Dora Akunyili who The Tide sources in Abuja reveal may have it tough with apologists of ailing President Umaru Musa Yar’Adua.

This, our sources say, is due to her role in calling for confirmation of then Vice President, Goodluck Jonathan as Acting President.

By Friday last week, The Tide sources hinted of clandestine moves by some pro-Yar’Adua senators to frustrate Acting President, Jonathan ‘s plan to have Prof Akunyili in the new cabinet.

Another Tide source however, said Prof Akunyili has done creditably and brought honour to Nigeria with her rebranding campaign and should naturally enjoy the support of the ruling party top brass and other stakeholders.

The former Information and Communications Minister’s role in bringing to an end the political impasse created by the 93 day absence of Ailing President Yar’Adua, our source said, earned her a pro-active and nationalistic posture which Nigeria requires of members of the new cabinet.

The Tide also learnt that two ministerial nominees, Odein Ajumogobia (SAN) and Godsday Orubebe, respectively may have an easy ride in the upper chambers because of their bridge-building credentials within the mainstream of the party and the government.

However, that may not be the case with many of the other nominees from the dissolved cabinet, our source said.

Of the new ministerial nominees, question have been raise concerning the choice of Mutalab Yar’Adua, of the late General Shehu Yar’Adua, and the wife of Chief Tony Aneinh, former chairman, Board of Trustees of Peoples Democratic Party (PDP), Josephine Anenih, both of whom critics say have no business in the emerging cabinet.

It is however, not known if it is the outcome of the extensive consultation carried out between Acting President, Jonathan. It would be recalled the Acting :President and stakeholders dissolved the Executive Council of the Federation (EXCOF) on March 17 and on March 23 sent a list of 25 nominees among them seven members of the dissolved cabinet, before increasing the number to  33,in another list sent to the national assembly.