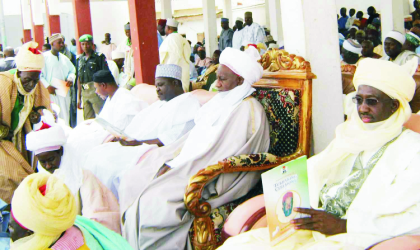 From right: Adamawa State Commissioner for Lands and Survey the "talba" of Mubi, Alhaji Abdulrahman Shuaibu, Emir of Mubi, Alhaji Abubakar Isa, Secretary to the State Government, Mr Kobis Ari and others at the turbaninig of Dan Malikin Mubi in Adamawa, yesterday.

The Acting President, Dr Goodluck Jonathan says Nigeria’s march to a better society was mortgaged by those in positions of authorities when they could not do what they  were  supposed to do at the turn up of events.

Jonathan said Thursday at a church service to mark the completion of the Primacy of Anglican Archishop, Peter Akinola and the presentation of the new Primate, Anglican Commission, Most Rev Nicholas Dikeriehi Okoh, that Nigeria is experiencing problems in many strata of national life because ‘our leaders failed to use their positions to transform Nigeria to a better society”.

Though the acting president was not categorical on what the leaders failed to do, he said, “ as a nation, we are challenged more than ever before to do the right now in order to actualise the dreams of a better Nigeria.

At the church service, the Cathedral Church of the Advent Life Camp, Gwarinpa, Abuja, Jonathan was particularly worried that corruption had made nonsense the march to national greatness.

He cited a case in which church members reportedly pulled their resources to bail a corrupt colleague in police net. He charged the church to rise to the challenge of rejecting members whose corrupt lives are bad influence to others.

Jonathan who said all hopes are not lost in the efforts to transform the polity, also urged the church to partner with government to redress the ills that have battered the socio-economic and political image of the nation.

Earlier in his maiden sermon as Primate of Church of Nigeria, Most Rev Nicholas Okoh had said that Nigeria can not claim to be on the march to prosperity when unemployment is at its peak, power supply epileptic, corruption in high and low places, killings and inhumanity in the land as well as wide range of poverty ravishing the citizenry.

Okoh accused government of abusing the usage of oil revenue against the interest of the generality of Nigerians.

He did not mince words that Christianity was born in plural society and so the church which is an assemblage of Christian faith must not shy away from commenting on issues of common interest in a plural society.