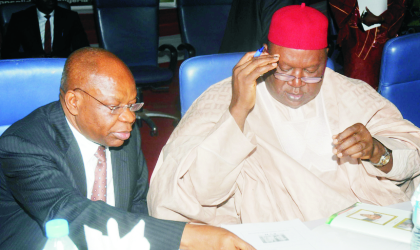 The sacking of the federal cabinet, penultimate Wednesday, by the Acting President, Dr. Goodluck Jonathan, to say the least, did not come to many Nigerians as a surprise at all, except perhaps, for those who have not been watching events within the presidency.

The rancour, bitterness and bad blood amongst the sacked ministers and the presidency, to a large extent, contributed immensely to the cabinet dissolution. Besides, most of the ministers were just redundant, especially since the indisposition of the ailing president Yar’Adua.

In fact, the way and manner some of the sacked ministers were carrying out governmental business fall short of expectations. Some of the ministers carried on as if nothing was at stake, and their actions and inactions were questionable and retarded national interest and development.

It was obvious that the presidency was sharply polarised into two camps, those loyal to the ailing president Yar’Adua and others to acting president, Dr. Jonathan, as if both did not run under the same ticket.

The Obasanjo/Atiku scenerio virtually replicated itself in the presidency and the country was paying dearly for the absurdity among the power brokers.

The power-game was even more evident in the battle of wits between Mr. Micheal Aondoakaa, former Attorney General and Justice Minister and his Information/Communications counterpart, Prof. Dora Akunyili, who threatened to sue Aondoakaa for libel over his comments on Akunyili’s stewardship at NAFDAC.

The deployment and movement of soldiers from the brigade of guards in the presidency to the Abuja airport on the arrival of ailing Yar’Adua without the consent and approval of Dr. Jonathan was another eye-opener to most Nigerians to the fact that the presidency was embattled.

There were also reports that some ministers were no longer taking orders and directives from Dr. Jonathan, apparently to register their disapproval of Jonathans acting capacity.

So while dissolving the Federal Executive Council (FEC), Jonathan acknowledged the contributions of the ministers to national development but restated that at this critical moment of the nation’s socio-political history, the need to inject fresh blood and bring greater vigour to governance becomes imperative.

He proclaimed that “as part of the larger strategy to frontally confront the core challenges that face the nation at the critical moment of our history, the change and shake-up is inevitable.”

The dissolution of the cabinet has clearly demonstrated that Jonathan is fully in charge. Nothing contrary is expected as he will be held solely responsible if Nigeria drifts further at this critical moment.

It is therefore expected that the Acting President will use his wealth of experience in public administration and governance to appoint men and, of course, women with repute, goodwill and full of patriotic zeal to the new cabinet.

Jonathan must, as a matter of national interest bring in professionals and technocrats and avoid sycophants and boot-lickers whose stock-in-trade is to rip off the country for personal gains. Only credible and well-meaning citizens should be considered for the new cabinet. History beckons on Jonathan to deliver Nigeria and take her to the next level.

The Acting President needs to be reminded that the challenge before him, though may look enormous but it is not insurmountable.

He must face the challenge with almost sense of responsibility and patriotism. Thank goodness that he has the full support of the National Assembly and, indeed, all well-meaning Nigerians. The Governors Forum, the civil society, the media and the generality of Nigerians are behind him and so he can not afford to fail.