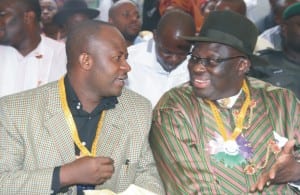 The Save Nigeria Group, a body of renowned civil rights activists headed by Nobel Lauret, Professor Wole Soyinka, has given the Federal Executive Council (FEC) a one-week ultimatum during which to declare ailing President Umaru Musa Yar’Adua medically incapacitated to continue as president.

Addressing a crowd of demonstrators in Abuja at the weekend, Professor Wole Soyinka said the extra constitutional resolution taken by the National Assembly failed to address the core concerns of Nigerians who desire a substantive president and Commander-In-Chief of the Armed forces of the Federal Republic of Nigeria.

The demonstrators said that their public protest three weeks ago was not designed to have Vice President Goodluck Jonathan as Acting Presidence, but for Nigerians to have a full-fledged President at these very trying times in our democratic experience.

Prof Soyinka, who was accompanied by cleric, Tunde Bakare, ex NBA President, Olisa Agbakoba, foremost human rights activist Femi Falana and former Kaduna State Governor, Balarabe Musa, said the truth needed to be told that President Yar’Adua was not  medically fit to steer the ship of the Nigerian state as president and should be made to  step aside for another executive president.

The doctrine of necessity which the National Assembly used in proclaiming Vice President Goodluck Jonathan as Acting President, the group said, bore a very striking resemblance to the interim National Government of Chief Earnest Shonekan set up by the military after the annulment of the June 12, 1993 presidential election.

According to Prof Soyinka, Nigeria urgently needs one with a strong political will to pursue political reforms, saying Nigeria must not be made to go to the next elections using existing electoral laws which, in his opinion, cannot take Nigeria further than it has been.

Prof Soyinka said after the one week given the FEC elapses without a concrete statement from FEC, Nigerians would have no other opinion than to insist on the swearing- in of Jonathan as the substantive president.

Meanwhile, a delegation of members of the House of Representatives that went to Saudi Arabia to assess the true state of the president’s health returned home yesterday without access to the ailing Commander-in-Chief.

Members of the delegation were said to have been prevented from seeing President Yar’Adua by the ailing President’s wife, Turai Yar’Adua, now being accused by many as solely responsible for the decision of who sees the country’s President.