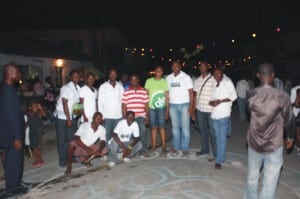 A group of militants in the Niger Delta under the auspices of Niger Delta Survival Movement has broken ranks with the Movement for the Emancipation of the Niger Delta (MEND), the mainstream militant group in the region, saying the latter has lost focus.

In a statement made available to The Tide source, signed by its spokesman, Black Gold, the group said, “after due consultation with all sincere and selfless stakeholders in the struggle for the genuine emancipation of the down-trodden people of the Niger Delta, we have resolved to break ranks with the so-called Movement for the Emancipation of the Niger Delta, (MEND).

“ We have also resolved to continue the pursuit of freedom, more involvement of Niger Deltans in their affairs and the development of the region under a new platform known as Niger Delta Survival Movement,” he added.

According to him, “We have arrived at this painful but necessary decision, after watching in utter dismay as MEND, which was formed to lead a revolution for the freedom and development of the region, become an avenue for the perpetration of the same evil it was set up to fight.

“We are shamed indeed, to disclose that MEND has become a tool for self- enrichment and aggrandisment. The deception and manipulation of our courageous fighters for the personal benefit of a few leaders in MEND will emerge as the saddest experience in the history of the Niger Delta struggle. We wish to ask a few questions at this point.

“Where are the so called leaders of MEND today? Are they with the boys in the various ‘concentration camps’? The answer is a painful NO.

They are hibernating in Government Houses, cruising around in choice automobiles or scavenging for contracts. True revolutionaries do not indulge in frivolities when there is work to be done. The Niger Delta struggle deserves better direction, leadership and sincerity of purpose.

“The Niger Delta Survival Movement will not be engaged in any reckless and disorderly employment of violence. Rather, it will pursue its interest with decorum and circumspection.

However, it will be a regretful error to misread this position as weakness”, it stated.

The group added, “We appreciate the progress made by the Federal Government on the East-West road and the proposed Niger Delta coastal road network. However, we call for the expeditious handling of all life-improving projects in the Niger Delta.

“We will cooperate with the Federal Government, as long as there is irreversible commitment to the logical conclusion of the post-amnesty programme.

To this end, we will restrain our fighters and remain faithful to all programmes directed at the improvement of the lives of the majority of Niger Deltans.

“Therefore, we will see our current hardship as our contribution to the emergence of a better and an egalitarian region. We pray that the enemies within will turn a new leaf”, it further stated.