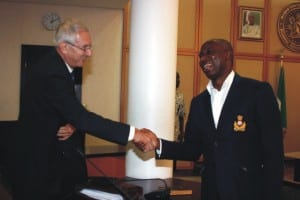 Nigeria’s ailing President Umaru Yar’Adua will write a letter handing power over to his vice-president, his adviser has told the BBC.

The letter, formally informing the Senate that President Yar’Adua is on “medical vacation”, automatically means his deputy becomes acting president.

The president’s allies have previously resisted calls for him to step aside.

He has been in a hospital in Saudi Arabia since November, prompting fears of a power vacuum and street protests.

The president is suffering from an inflammation of the lining around the heart and has long suffered from kidney problems.

The BBC’s Caroline Duffield in Lagos says Nigeria’s political struggle over the president’s fitness to rule may be nearing an endgame.

The president’s special adviser on legislative affairs, Abba Aji, did not say when Mr Yar’Adua would write the letter but he said there would be no “undue delay”.

His failure to transfer powers to his deputy before he left created a power vacuum – in which fear and false reports flourished, she says.

Political tensions have been high – government business has stalled and legislation been frozen and cracks have appeared in the uneasy peace in the oil-producing Niger Delta.

But she was shouted down in the cabinet meeting, government sources told the BBC.

The federal high court has ruled that there is no constitutional requirement for the president to hand over power when he is abroad receiving medical treatment.

But he now appears to have given in to all the pressure.

Nigeria’s split between the mainly Muslim north and the mainly Christian south has complicated the issue, analysts say.

Northern power-brokers may be reluctant to see Mr Yar’Adua, a northerner, hand over power to Vice-President Jonathan, from the south, before the next scheduled presidential elections in 2011.

Since the return to civilian rule, power has usually rotated between the regions.