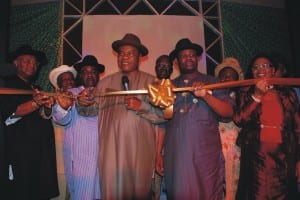 The committee members said they are dismayed by the inclusion of another  N5billion for a gas pipeline projects supposedly completed in the 2009 fiscal year and expunged  the fresh provision for that in the current appropriation bill.

Chairman of the Senate committee on Gas, Senator  Izunaso Osita in strong terms told Minister of State for Petroleum, Odion Ajumogobia that the N5billion appropriation in the 2010 budget of the Ministry would not be approved.

“The committee will not appropriate fund for projects that have listed as completed. We are not going to approve this” Izunaso said.

Senator Patrick Osakwe, was the first to query the N5 billion provision in the ministry’s budget

Minister of state for Petroleum, Mr Ajumogobia  along with officials of his ministry including the Permanent secretary in the effort  to justify the N5billion appropriation but couldn’t convince them, promised however  to present fresh documents to justify the provision on a later date.

According to the ministry officials, “in view of the current emphasis on gas project, the ministry considers it is necessary to establish Gas Spur line to feed Calabar-Ajaokuta and Ajaokuta-Abuja-Kano pipelines”.

Permanent Secretary of the Ministry, Elizabeth Emurem said the N5 billion request was to make up for the Zero allocation – for gas project in the 2010 budget proposal but the committee members did not buy that.

The committee  queried the N8 billion proposed for the Petroleum Industry Bill (PIB), demanded for more details for it to take action on the 2010 budget and also  heard how it over-valued some of the gas projects appropriated for in the 2009 Appropriation and other discrepancies in various projects being executed by the ministry.

Yar’Adua ’ll Hand Over To VP – Aide …Govs Back Jonathan