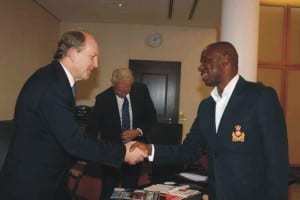 If results of the constituency delineation exercise conducted by the Independent National Electoral Commission (INEC), sails through, Rivers State may get eight new ones ahead 2011 elections.

The revelation was made by the new Resident Electoral Commissioner in the state, Barrister Austin Okojie in a chat with newsmen last Thursday in Port Harcourt.

Though he said the proposal may be amended by the National Assembly, he however, assured that by the new plans, constituency delimitation would be concluded before the conduct of 2011 elections.

Currently, Rivers State has 32 constituency seats in the Assembly and with additional eight, the House membership is expected to rise to 40 by the year 2011.

On the other hand, Barrister Okojie has called on members of the public who are yet to register their names in the ongoing voters registration exercise to do so, as that is the only way they can vote and be voted for.

He stated that such people visit the various INEC offices in their local government areas to check or register their names.

The INEC Commissioner called for the Cooperation and support of the people of the state since he can’t achieve success without everybody’s active participation in the electoral process.

Under his new posting, Barrister Okojie is billed to oversee electoral matters in both Bayelsa and Rivers State, following the posting of the INEC commissioner there to Anambra State.

He submitted that the new postings of commissioners and officers in INEC now is,” Part of the strategic plan to ensure a smooth conduct of the next general elections.”