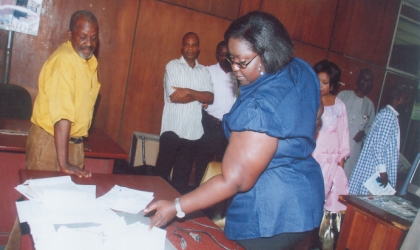 Rivers State Government has renamed the State University of Education, Rumuolumeni (RSUOE) after the late Chief Ignatius Ajuru, as a way of immortalizing him for his enormous contributions to the development of education in Nigeria.

He explained that the best way to acknowledge the contributions of Chief Ajuru towards the socio-economic, political and educational development of the state and country at large was to name an institution after him.

The governor who said he was personally touched by the death of Chief Ajuru, described him as a man of character, peace and humble disposition.

He noted that Chief Ajuru, stood by him throughout the period of his struggle to actualize his mandate when others abandoned him to his fate, stressing that in him was a dependable ally who stood for what he believed.

The State Chief Executive, however, stated that death remains a necessary end for all mortals to answer to the Creator on how they spent their lives, and noted that late Chief Ajuru would face God with dignity because he affected mankind positively.

Governor Amaechi consoled the immediate family to take solace in the fact that he lived a life worthy of emulation, and prayed God to receive him in His bosom.

In his tribute, the National Chairman of the Peoples Democratic Party (PDP), Prince Vincent Ogbulafor, said he found it difficult to actually express the feeling of party members, as the late Chief Ajuru had served in several capacities, uplifting the fortunes of the party in the process.

Chief Ogbulafor said he would be remembered greatly for his good services to the nation as an Ambassador to Gabon and Ukraine, member of Peace and Reconciliation Committee, while enjoining the bereaved family to weep like those that have faith in God.

In his sermon, Rev. Father Peter Alawa, said Christians should be prepared for home call at any time, since, according to him, nobody knows when the owner of life will demand for it.

Rev. Alawa said death remains a mystery which only the Maker understands, and advised the family of late Chief Ajuru to leave vengeance of how their father died to God, as the perpetrators would certainly receive the wrath of God.

Late Chief Ignatius Hekaire Ajuru, 64, was murdered on December 20, 2009, at Obehie, Abia State, during a private visit to Imo State.

The burial attracted a lot of dignitaries including Politicians, Traditional Rulers, members of the Academia, Captains of Industry and the Clergy.