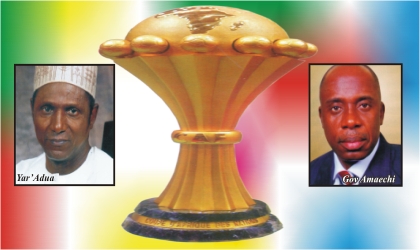 Nigeria has asked for increased security around her team in the wake of the shooting of the Togo national team bus in Cabinda, which left the bus driver dead, and about six players injured.

“We are monitoring the situation, but we have asked for additional security, including military escort for our team,” NFF Chief Media Officer, Ademola Olajire told Tidesports’ source.

“We are aware that the shooting took place in Cabinda, well away from where our team is, but we would like to assure Nigerians that the NFF is doing everything to ensure that the players who represent us are safe.”

Super Eagles Media Coordinator, Idah Peterside told the source that the players were focused on the task at hand, and would not be worrying over the situation.

“We heard the news, but we have been told that we are very safe in this area,” he said.

“The team has resolved not to be distracted by these events.”

Meanwhile, Governor Chibuike Rotimi Amaechi of Rivers State has assured Nigerians that the National Team, Super Eagles, would not be disgraced out of the Nations’ Cup in Angola.

Governor Amaechi, who gave this assurance yesterday in an interview with newsmen at the Port Harcourt International Airport, shortly before departure to Angola with other members of the Presidential Task Force on Super Eagles Qualification said the “players are prepared and ready to do the nation proud”.

The governor, who is the Chairman of the Presidential Task Force on Super Eagles qualification, said “what we expect is that we will do our best, we will not underrate any team and sure that the players are ready and no team will disgrace them easily”.

Governor Amaechi, who boarded a chartered flight along with members of the PTF, including J. J. Okocha, Segun Odegbami and others, expressed optimism that “Nigeria will come tops at the Nations’ Cup, once everybody puts in their best” and solicited for support and prayers for the national team from all Nigerians.

He also used the opportunity to call on Nigeria to demonstrate enough patriotism by supporting their team in spite of the outcome of any match, emphasizing that those who support premiership league clubsides do so not minding the outcome of their matches.

“We should be patriotic enough to support our team, even if we are not doing well, but I believe we will do well”, he declared.