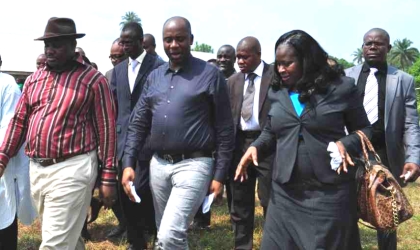 Togo’s national team bus was machine-gunned yesterday in Cabinda, Angola, leaving several players injured and the bus driver in serious condition after crossing into the country by road from Congo.

Latest news from Angola indicates that the driver of the bus died from gunshot wounds. Four others have also been shot: two of them are players, reported to be Serge Akakpo and Kodjovi Obilale. A team doctor and another Togolese official of an unknown role were the other two victims.

Akakpo’s club, FC Vaslui, have issued a statement, “Akapko has been shot and badly injured. He is now out of danger. Akokpo was struck by two bullets and lost lots of blood. He has undergone surgery that has went very well.

Meanwhile, Togo Midfielder Alaixys Romao has said that Togo’s future in the tournament is now far from certain.

He said, “we’re not thinking yet of what could happen. But it’s true that no one wants to play.

“We’re not capable of it. We’re thinking first of all about the health of those injured because there was a lot of blood on the ground. For the moment there is not much news because they have been taken to different hospitals.

Others were equally distressed. “I’m fine but the players are in bad shape. It’s madness. We’re in the hospital in the north of Cabinda. We were shot at like dogs. They were hooded and armed to the teeth. We spent 20 minutes stuck under the seats of the bus,” said a distressed Thomas Dossevi while speaking to French radio station RMC “There was security but there wasn’t enough.”

The bus was attacked just over the border from DR Congo into Cabinda, an Angolan exclave. The oil-rich province of Cabinda has recently been embroiled in a long-running independence struggle with Angola. Nonetheless, seven African Cup of Nations matches are scheduled to take place in Cabinda’s main city.

Togo had conducted a training camp in DR Congo prior to the African Cup of Nations, which is due to begin tomorrow.

A statement attributed to the FLEC-PM (Liberation Force of Cabinda – Military Position) to some sources indicated that this was the start of a continued operation.

“This attack just caused one death and 3 gravely injured persons. This operation is just the beginning of a series of targeted actions that will continue across the territory of Cabinda,” said a spokesperson.