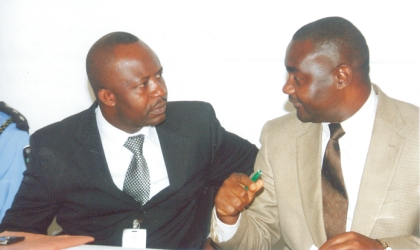 The Nobel Laureate, who arrived in Nigeria aboard Delta Airlines, wore a black pair of trousers and a brown top.

He was believed to have travelled in the upper class cabin of the aircraft, being one of the first few passengers that came out through the arrival hall of the Murtala Muhammed International Airport, Lagos.

When asked what the new passenger screening system looked like in the US, Soyinka answered, “very strenuous”.

He, however, explained that he could not grant an interview because he was coming from a very long trip.

On his opinion about the recent blacklisting of Nigeria by the US, Soyinka replied ‘no comment’, adding, “ I am just coming back from a long trip.”

It is, however, expected that the Nobel Laureate would speak on the matter later.

However, there are indications that many Nigerians have also been subjected to very strenuous screening processes at the US airports and other ones across the world.

Some passengers aboard Delta from the US, about one hour after Soyinka, also described the new screening system as rigorous.

Most of the passengers, who refused to give their names, said the blacklisting of Nigeria “is one of the most unfortunate things” that can happen to the country.

A passenger told our correspondent that he would rather prefer to go through Europe to America due to the “embarrassing” screening processes.

A former Managing Director of World Airways, Dr. Peter Obafemi , who also arrived from US, described the new security process as very “tight”.

“One of the things US don’t want its security officials to come and meet people at the jet way, before the checking point, to demand their travel documents. This was what happened to me on January 1, when I arrived at the US, shortly after the unfortunate incident.”

A Nigerian, Farouk Umar Abdulmutallab had on Christmas Day attempted to blow up an American airliner shortly before the aircraft arrived in Detroit, Michigan.