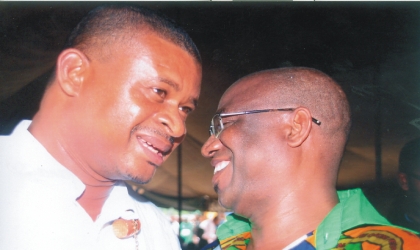 The Vice President, Goodluck Jonathan has told the Federal Executive Council (FEC) that he spoke with the ailing president, Musa Yar’Adua briefly on Tuesday.

The Minister of Information and Communication, Professor Dora Akunyili made the disclosure while briefing State House Correspondents.

Asked to tell Nigerians the present condition of the president’s health, she said that she had said all she knew.

Meanwhile, the vice president who always arrived on time to chair the FEC meeting was, yesterday, behind schedule due to another meeting he held behind closed-doors with the Governors Forum at his residence. The meeting lasted for about two hours.

As early as 8:30 a..m. the governors elected under the platform of the Peoples Democratic Party (PDP), and led by chairman of the Forum, Governor Bukola Saraki of Kwara State, stormed the vice president’s residence in a long convoy. By 9:30 a.m. when the meeting ended, the governors, in the same manner they came, zoomed out while the vice president’s convoy also left residence to attend the FEC meeting.

Details of the meeting, however, remained scanty, as no participant was willing to go into details on what the governors discussed with Jonathan.

Vanguard, however, spoke to the chairman of the Forum, Dr. Saraki who said “the meeting went on very well” adding that details of the meeting would be made public by the vice president at the appropriate time.

But an impeccable Presidency source said the governors came for a solidarity visit and to reassure the vice president of their support and cooperation in the face on the growing political quagmire in the country. The source added that the issue of the health of the president was discussed with the VP in addition to other pressing national issues occasioned by the absence of President Umaru Yar’Adua.