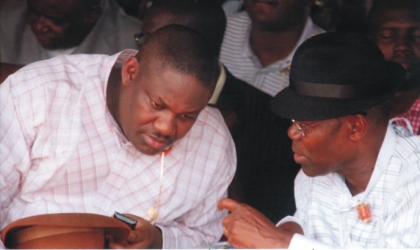 Landslides and a tsunami destroyed the homes of about one-third of the population on a Solomon Island, but lives were likely spared as residents with memories of previous disasters fled quickly to higher ground, officials said yesterday.

From the air, extensive damage could be seen on a remote western island after a 7.2-magnitude temblor triggered the landslides in the Pacific Solomon Islands on Monday, said disaster management office director, Loti Yates.

No injuries have been reported some 30 hours after the biggest in a series of quakes churned a tsunami wave that was up to 10 feet (3 meters) high as it plowed into the coast, officials said.

However, more than 1,000 people have been affected after some 200 houses were destroyed on Rendova, an island some 190 miles (300 kilometers) from the capital Honiara. Only 3,600 people live on Rendova.

Photographs taken from police helicopters yesterday showed debris lining the foreshore and damaged houses on the coasts of Rendova and Tetepare, as well as deep scars on hills and cliffs caused by landslides.

“The fact it was daylight, the isolated nature of the wave and that the landslides were in a relatively sparsely populated area” also helped, he said.

The largest quake  magnitude 7.2  happened about 9:30 a.m. local time Monday and caused the tsunami to hit the coast a short time later. At least nine other quakes greater than magnitude 5.0 have rocked the earthquake-prone region since.

In the provincial capital Gizo, dive shop owner Danny Kennedy said the general rule is that “if there’s anything more than 20 seconds of shaking or any sea water recedes, head for the hills.”

A police boat patrolled yesterday to check the coastline, where many homes are at sea level, making them vulnerable to tsunamis, National Disaster Management Office spokesman Julian Makaa said. No casualties had been reported so far, he said.

One village, Retavo, home to about 20 people, was reportedly completely inundated by a wall of sea water up to 10 feet (3 meters) high, but Makaa said no deaths or injuries had been reported there.

Emergency food, water and tarpaulins were being shipped in.

The Solomon Islands lie on the “Ring of Fire”  an arc of earthquake and volcanic zones that stretches around the Pacific Rim and where about 90 percent of the world’s quakes occur.

Amodu Gets Full House In Durban