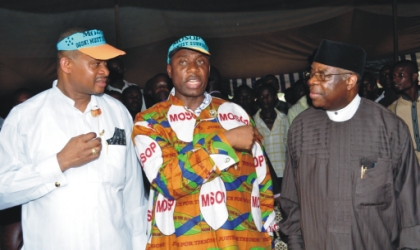 Rivers State Government says it has stopped the financing of medical treatment abroad for indigenes of the state.

Governor Amaechi explained that foreign medical trips cost the state government huge sums of money, noting that such funds would rather be channeled toward equipping its own hospitals to take care of the health needs of greater number of people.

The governor explained that analysis of beneficiaries of the medical treatment abroad shows that only the rich and influential people in society were gaining from such government gesture, as the common people hardly had access to government functionaries to push their cases.

He noted that the state government was aware of the enormous pressure on the Braithwaite Memorial Specialist Hospital, Port Harcourt, which is the only functional secondary health institution in Port Harcourt, and assured that the new Kelsey Harrison Niger Hospital completed recently, would be equipped this year.

The State Chief Executive also hinted that twenty-three General Hospitals in the local government areas would be renovated to complement the newly built primary health centres across the state and advised residents with minor ailments to patronise the health centres, to reduce the pressure on the hospitals.

The governor said the completed health centres are fully equipped with at least a medical doctor, trained midwives and nurses to take care of the health needs of the people.

According to him, the current situation where all patients rush to BMH for medical attention has resulted in the over-crowding in the hospital, and cited a situation where a doctor attends to about 100 patients in a day, adding that such arrangement would lead to diminishing returns on the part of the medical officer.

The evening sit-out was attended by media executives based in Port Harcourt, and was the first by any Governor in the state.

Meanwhile, the State Chief Executive approved the naming of the new Stadium to be built at the Greater Port Harcourt City after one-time Green Eagles player, Adokiye Amiesimeka, in-view of his enormous contributions to the growth of football in the state and Nigeria at large.

Governor Amaechi said the building of the 85,000-seater capacity stadium, would be done alongside the hostels in the games village in preparation for the hosting of the forthcoming National Sports Festival slated for Port Harcourt before the end of this year.

Explaining that the contractors have given assurances that the projects would be completed in October, ahead of the Sports Festival, the governor lamented the poor quality of jobs carried out by some indigenous contractors in the state who are handling some of the numerous state projects across the state.

The governor specifically condemned the poor quality of job done by the contractor handling the UPE model primary school, Borokiri, Port Harcourt, the Churchill Road Primary School, and the Eleme Town road projects, warning that the names of those contractors would be made public if no significant changes were noted.

He, however, thanked some local contractors for carrying out their projects diligently, while bemoaning those that tend to see their jobs as political patronage, assuring that government would extract every kobo given to them to carry out the projects.

The State Chief Executive said the security situation in the state has improved tremendously and lauded the contributions of the various security agencies towards the achievement of peace in the state.

He remarked that the New Year would witness the consolidation of ongoing projects to ensure their completion under the 2010 budget, noting that several road and educational projects are at various stages of completion as some contractors were working day and night.

Governor Amaechi also hinted that the state government was in court with neighbouring Bayelsa and Akwa Ibom States over the-actions of the National Boundary Commission that ceded oil wells in Soku and Andoni axis of the state to them, and hoped that the issues would be resolved soon.

The governor thanked the State House of Assembly, the Judiciary and Service Commanders for their level of support, as well as cooperation and loyalty of the people of Rivers State despite some hard decisions taken by the state government in the past one year.

Earlier, in his welcome speech, the Secretary to the State Government, Mr Magnus Abe, said the year 2010 would be a unique one for the state because last year witnessed a lot of achievements by the present administration.

Mr Abe opined that the level of Peace achieved has began to attract investors back to the state, noting that the government would consolidate on it to make Port Harcourt the safest city in the country as only policies and programmes that hasve positive impact on the lives of the people would be pursued.

The well attended State Annual Banquet also saw presentation of gifts and souvenirs to all the guests in attendance by the state government.