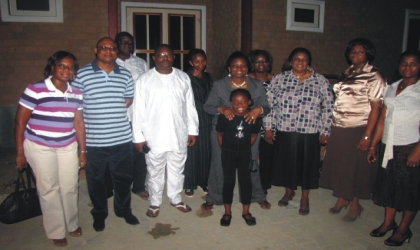 More than 106 model primary schools being built in the 23 local government areas of Rivers State have been completed and will be equipped soon.

Under the second phase each of the schools will have computer and ICT Centres, well-equipped libraries, soccer pitches, basket ball courts and modern school furniture.

Governor of Rivers State, Rt. Hon. Chibuike Rotimi Amaechi who made this known in Government House, Port Harcourt, yesterday at a new year buffet for media executives explained that as soon as Due Process Bureau concludes its qualification and approval, contracts would be awarded for the equipment of the schools.

The government used the forum to announce that 150 medical doctors have been employed and transferred to the 150 health centres built across the state, assuring that residential quarters for the medical personnel will soon be completed to ensure proper medicare delivery in the state.

Governor Amaechi acknowledged the huge pressure, on the Braithwaite Memorial Specialist Hospital and advised Rivers people and those who live and do business in the state to patronize the health centres.

On road, the governor said government intends to recover mobilisation payments move to contractors handling the Trans-Kalabari Road network, warning that any such beneficiary who defaults in refunds shall be dealt with according to law.

According to him, the Unity Road initiated by the Odili administration but inherited by his government has reached Nkoro with the promise of linking Andoni very soon.

Governor Amaechi challenged critics who accuse him of doing less in the riverine areas to visit Opobo where he said a virgin land more than the size of the original area has been reclaimed for Opobo people.

In like manner, Governor Amaechi continued his government did not only inherit the nearly 10-year old Okrika Ring Road but also expanded the project with more than four bridges and promised that he will take a thorough inspection focus of the project within the month.

Governor Amaechi said his administration intends to leave behind a legacy of completed jobs adding that this year emphasis will be placed on giving more attention to on-going projects particularly the Kesley Harrison Medical Centre, the new Rivers State University of Science and Technology Complex and the Adokiye Amiesimaka Sports Complex.

Also speaking the state Information Commissioner, Mrs Ebim Seminatari said the relationship between the Rivers State government and the mass media remains the best in the country and warned against any demands actions and inactions that could jeopardize that partnership.

In his vote of thanks, Rivers State NUJ chairman, Mr Opaka Dokubo, enjoined the governor to see members of the mass media as partners and veritable stakeholders who deserve empowerment.

He however thanked government for the mutual relationship between government and the press and hoped that both parties will build on it.