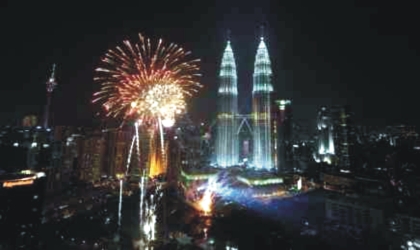 World rings in new decade with fireworks and parties.

As Nigeria joins the rest of the international community to mark the dawn of a New Year, citizens have called on the government to ensure total post amnesty deal implementation.

Also expected in the New Year are laws to curb electoral violence in the country, while Rivers State Government should keep to its promise of completing all on-going projects.

In an interview with The Tide, the spokesman of the Nkoro Council of Chiefs, Alabo Ibibo Rogers, said that, he expects the government to ensure that all proposals towards bringing a lasting peace to the Niger Delta are implemented.

“It is my expectation that all projects lined up for the Niger Delta are faithfully executed,” he urged.

In his view, Mr Joel Egele said that government should put in place programmes that would generate employment for the youth in the country.

Mr Egele specifically recommended the lifting of the embargo on employment, while workers’ salaries should be reviewed upwards.

For Miss Ifeoma Chinadozie, a bank staff, the Rivers State Government should make laws to regulate rent in Port Harcourt city and its environs, while the on-going road construction programme be sustained.

Also speaking, Mrs Uche Ego Maduka urged the government to check exploitation by landlords in Port Harcourt city. For Pastor Edimo, Nigerians must know that the fear of God is the beginning of wisdom, “thus God must be put first in all our attitude.

In his view, Mr Gowon Usende a staff of the Rivers State Newspaper Corporation, said that the condition of workers should be improved.

Also speaking, a member of the State House of Assembly, representing Etche Constituency I, Hon Eke Samuel opined that despite some of the challenges in the nation’s economy, there is still hope in 2010.

According to him, the amnesty policy initiated by the federal government in the Niger Delta region, would impact positively on the economy, adding that oil production in the region has increase tremendously.

He urged Nigerians to continue to pray for the nation especially, President Musa Yar’Adua for his quick recovery, adding that in unity and harmony the country would move forward.

According to him, the recent scenario in the country’s polity calls for more concern and adequate attention by those entrusted with the governance and administration of the country.