As Nigerians continue to express concern over the health of their president, Umaru Musa Yar’Adua who has been in a Saudi hospital for over three weeks, Minister of State for Petroleum Resources, Hon Odein Ajumogobia (SAN) has assured that he would return to the country soon.

Ajumogobia also took a swipe on some members of his professional body, the Nigerian Bar Association (NBA) who picked holes in the president’s long absence and called for either his resignation or handover to Vice President Goodluck Jonathan.

The minister told The Tide in an interview in Abuja that there was no cause for alarm over the president’s health and absence as this was not the first time that he would be away on health grounds, moreso when the affairs of state have not suffered any setback. He then accused opposition politicians of politicizing the president’s health.

“I think unfortunately, politicians especially from the opposition are playing politics with the health of the presidents. The president is the president of all Nigerians, including the opposition politicians. He is indeed in many respects an embodiment of the nation and all should join hands to pray for his speedy recovery and return to Nigeria. I have faith that that will happen soon,” he said.

Ajumogobia, former Attorney-General and Commissioner of Justice, Rivers State who expressed disappointment over some recent statements credited to the NBA over the president’s health argued that in the circumstance, the lawyers body should have taken it upon itself to proactively explain the ‘legal imperative’ surrounding the president’s absence to the public rather than being seen to have pitched tent with opposition politicians against the president.

He however condemned the statements credited to some NBA members, asserting unequivocally, “I must say I am very disappointed by some of the statements made and credited to some prominent NBA members. But I think the calls made by these NBA members are out of place, irresponsible and should be seen as such. I think a responsible organisation like NBA should pro-actively explain the legal imperatives and processes to the public rather than joining opposition politicians to play politics with the issues.”

He argued further that “under our constitution, the president may in his discretion assign to the Vice President or any minister responsibility for any business of the government. When the president is away, he is presumed by law to have done so. That’s why I and all my cabinet colleagues are working on anything under this delegated authority requiring higher approval. We refer to the Vice President or FEC in the usual way under the same delegated authority. There is no crisis. It’s all politics. No vacuum. But it’s irresponsible politics.”

Ajumogobia was insistent that “this is not the first time that the President has been out of the country on health ground. The government continues to function effectively and there is no reason for one to be concerned in the way that some of the statements made in the media mischievously suggest.” 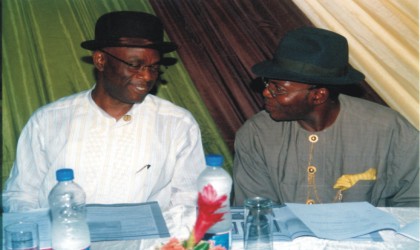