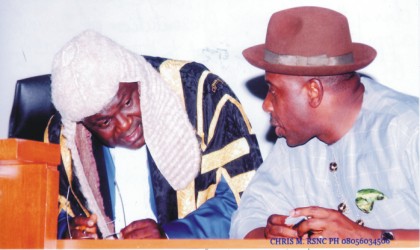 The Rivers State Government has presented a budget estimate of N429 billion for the 2010 fiscal year to the State House of Assembly for consideration.

Making the presentation, yesterday, on the floor of the State House of Assembly, Governor Chibuike Amaechi said the amount is slightly below the approved estimate of N432.28 billion for 2009.

The Governor said the sum of N275.5 billion was expected from federal allocation, N93.5 billion from the internally generated revenue while N60 billion is to accrue from the Rivers State Government 2009 savings.

He revealed that a breakdown of the budget proposal shows that the Education and Works sector gulped the highest allocation of N70 billion each, representing 32% of the budget estimate while Agriculture received the lowest amount of N2 billion representing 0.5%.

Governor Amaechi explained that the policy trust of the 2010 appropriation bill, which is tagged budget of consolidation is geared towards the completion of on-going projects.

He attributed the shortfall in the 2010 estimate to the reduction in revenue from the federation account as a result of the ceding of about 200 oil wells from the state to Akwa-Ibom and other neighbouring states by the National Boundary Commission (NBC) and the Revenue Allocation, Mobilization and Fiscal Commission.

The Governor pointed out that some of the challenges to be confronted in the 2010 appropriation include returning the state to her former status in order to make it one of the best investment destinations in the country, as well as improving the efficiency and effectiveness of the conduct of government business.

He said the budget was also aimed at reducing the over reliance on federation account and boosting internally generated revenue performance.

The State Chief Executive explained that huge investments have been made in the construction of 350 Model Primary and 24 Model Secondary Schools in the state in addition to other educational infrastructure.

He said the Health Sector was also witnessing massive turn around with the construction of 120 standard Primary Healthcare Centres and Hospitals across the state, while Power, Roads, Land Reclamation and Shore Protection are also given serious attention.

Receiving the 2010 appropriation bill, the Speaker of the Rivers State House of Assembly Rt. Hon. Tonye Harry thanked Governor Amaechi for presenting the budget estimate and assured him that the document will be given accelerated hearing to ensure early passage.