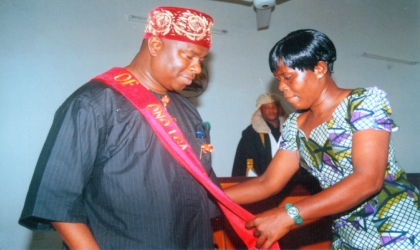 Rivers State Commissioner for Works, Hon Dakuku Peterside, being decorated by a lawmaker with the Opobo/Nkoro legislative Assembly, Hon Gift Opusunju, as life member of the Assembly, at the council premises, yesterday.

Thirteen public and private schools operating in Rivers State have been barred as centres for the West African Examination Council (WAEC)           examinations.

Commissioner for Education, Ms Alice Nemi, who announced the development at a meeting with proprietors of private schools, said the action was in line with the state government’s plan to wipe out examination malpractices in the state.

According to Ms Nemi the ban would last for two academic sessions, 2009-20011, during which teachers from the affected schools would not be allowed to supervise WAEC examination.

Consequently, the commissioner warned principals and proprietors of public and private secondary schools to always adhere strictly to acceptable standards in the conduct of public examination malpractices and to stop jeopardizing the future of the young ones, adding that examination malpractices plant seeds of fraud and criminal values in society.

Represented by the Permanent Secretary, Mr Richard Ofuru, Nemi urged all proprietors who had earlier submitted an over-blown list of S. S. 3 students for the forthcoming examination to resubmit the list for the on-going WAEC registration to the ministry on or before Tuesday next week.

Accordingly, the Education commissioner advised students and parents to take note of the de-recognition and act wisely in their own interest. She requested proprietors of the de-recognized schools who may have collected money from parents and students to return same to their owners.

Similarly the Education Commissioner disclosed that as a result of the outcome of conduct of previous public examinations 19 other schools have also been warned by WAEC from engaging in unwholesome practices in the forth coming public examinations as Government would not hesitate to frown at and act decisively with any principal or proprietor of public and private schools, who engage in examination malpractices.

Responding the president, Rivers State chapter of the National Association of Proprietor of private schools (NAPPS), Dr Edna Opara, expressed disappointment that some indulge in unwholesome acts to discredit the state and destroy the future of the young ones.

She however called for closer collaboration between the state ministry of Education and NAPPs to fight the ills in the school system.