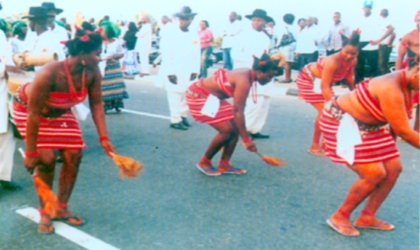 Flashback: Dancers showcasing their talents as part of the main attraction of the CARNIRIV. Today witnesses one of the major events of the seven-day cultural fiesta: the Carnival procession which will take participants through major Aba and Aggrey Roads.

The Supreme Court in Abuja, yesterday, cleared Prof Chukwuma Soludo as the authentic candidate for the Peoples Democratic Party (PDP), for the February 6, 2010 gubernatorial election in Anambra State.

The Tide gathered that the Supreme Court set aside the earlier judgment by the Appeal Court restraining the Independent National Electoral Commission (INEC) from recognising Prof Soludo as the candidate of the PDP in the Anambra guber race next year.

The Tide further learnt that Soludo went to the apex court to pray it to allow him run as the PDP candidate which was earlier turned down by the Appeal Court, saying that the Court of Appeal order was wrong.

Justice Shola Ogunlade who presided over the matter, wondered on what ground the Appeal Court order was decided.

The justices noted that the judgement ordering Soludo to remain as the PDP candidate in Anambra guber race is only to provide a level playing ground for all candidates in the state.

They also described as unnecessary the order of the Appeal Court stopping Soludo from parading himself as the PDP candidate in Anambra State.

It would be recalled that the Appeal Court recently asked the INEC not to feature Prof Soludo as the PDP candidate in the Anambra State guber race scheduled for February, 2010.

Delivering the ruling, the Appeal Court said that Prof. Soludo was not validly nominated by the party and therefore quashed his nomination.

Justice Mary Odili of the appelate court had on Friday, December 4, granted a preliminary injunction ordering Soludo to stop parading himself as the PDP governorship candidate for the Anambra election.

The injunction was sought by three PDP governorship aspirants, Mr. Valentine Ozoigbo, Nkoli Imo and Ferdinand Okoye who felt embittered by the way and manner Soludo emerged as the PDP governorship candidate. They asked the court to quash the election of Soludo on grounds that his nomination did not follow the provisions of the party.

Justice Danlami Senchi of the Abuja High Court had earlier ruled in favour of Soludo when the three governorship aspirants approached the court to nullify the election of the PDP flagbearer.

They went to the appeal court and sought an interim injunction to restrain Soludo from parading himself as the candidate of the PDP.

The appeal granted them an interim injunction and this made Soludo and the PDP to approach the Supreme Court to quash the ruling of the appellate court.

The apex court declined this and referred the matter back to the appeal court which fixed ruling for last Wednesday.

In his response, Professor Soludo said his trust in Nigerian Judiciary has been strengthened.” When God says yes no man can say no. Today is a happy day for democracy in Nigeria,” he said.