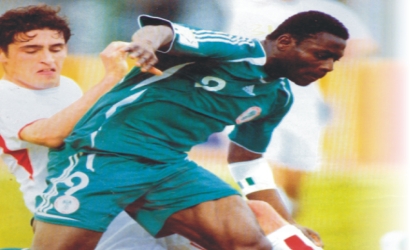 Super Eagles’ “Weapon of Mass Destruction”, Obafemi Martins (9) in action. There are fears he might not be fit for the Nations cup.

Telecommunications Company, Gobacom, has made a proposal to withdraw their sponsorship of the Nigeria Premier League (NPL) citing ‘lack of value on their investment’ but the NPL are insisting that the company has not followed the ouster clauses as stipulated in the contract.

Out of that sum, N922 383 000 is due in cash but the NPL claims that they are yet to receive a kobo, nearly six months since the payment was due.

NPL Executive Secretary, Alhasan Yakmut told Tidesports’ source that the meeting on Monday in Lagos ended in a stalemate when Glo offered to pay just N250 million of the N922 million due for the season.

“They made a proposal yesterday that they wanted to pullout, and they would pro rata the cost of the league so far and pay us N250 million,” Yakmut said.

“The meeting finally ended in a stalemate.”

Yakmut also added that Glo has been in breach of the contract since the start of the season, failing to pay up their sponsorship fee till date.

“In any case, they have been in breach of the contract since June. The contract states that the fee must be paid two months before the start of the season. It is now December, and they have still not paid.”

Yakmut also stated that Glo had informed the NPL of their intention not to renew their sponsorship of the property, which the body had accepted, but said pulling out midway was unacceptable, and the NPL would be taking the matter to arbitration.

“They have previously said verbally that they will not renew the contract and that is fine with us because we are in the last year of the existing contract.

“But if they want to pull out midway, they should go about it the right way otherwise, we will be taking the matter to arbitration.”

On their part, Glo has argued that the NPL has failed to provide the leverage commensurate with the huge investment they have poured into the league.

Apart from the cash investment, Glo also put in around N19 350 000 as value in kind, which comes in form of airtime and phones; N25 million for a league academy which has not been put in place three years after the initial contract and N50 million for monthly and end of season awards.

So far, no monthly awards have been held, and Glo insists that they have been organising the end of season awards and seminar.