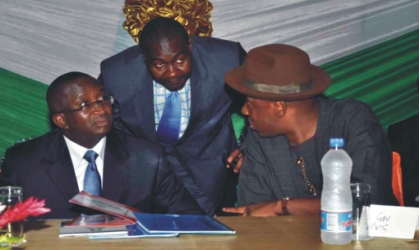 The federal government has earmarked N100 billion for the revival of Nigerian textile industry.

The Minister for Commerce and Industry, Chief Achike Udenwa who disclosed this at the zonal flag-off campaign for patronage of made in Nigeria Products in Port Harcourt also announced the nomination of Mrs Judith Amaechi, wife of the Rivers State governor, as the ministry’s matron for the campaign in the South-South zone.

Chief Udenwa described the nation’s textile industry as a shadow of itself, noting that apart from the massive loss of jobs, it has contributed towards widening the level of poverty and the gap between the rich and the poor in our communities.

The minister further said that the campaign on patronage of made in Nigeria Products is aimed at boosting Industrial production, thereby creating wealth and millions of jobs for Nigerians.

He stressed the need for Nigerians to imbibe the virtues of consumer patriotism as is obtained in the developed nations and urged the organised private sector (OPS) to follow the footsteps of the government in their procurement programmes.

“To the Nigerian Manufacturers this is a big challenge and opportunity for you to demonstrate your capacity to rise up to the task by ensuring high standards in products quality,” he said.

Minister for Commerce and Industry, Chief Achike Udenwa also described the Rivlux Paints owned by the Rivers State Ministry of Women Affairs as a product of high quality.

Meanwhile, despite the hiccups being faced by the federal government in the realisation of its proposed 6000 Megawatts of electricity in the country, the minister of Commerce and Industry, Chief Achike Udenwa, says the situation is still achievable before the end of this year.

Chief Udenwa who said this at a stakeholders meeting, Monday, in Port Harcourt however blamed the delay in the realisation of the project on low gas supply occasioned by the vandalisation of gas supply pipelines.

Chief Udenwa said that as part of efforts to ensure the rapid industrialisation of the country, the government has awarded contracts for roads and railways rehabilitation.

The minister urged the organised private sector to assist the government in its fight against smuggling while further soliciting their support in the campaign for patronage of Made in Nigeria Products.

Also speaking, the president of the Rivers and Bayelsa Chapter of the Manufacturers Association of Nigeria (MAN), Mrs E. E. Akpan called for the provision of a conducive environment for industrial growth and development.

Mrs Akpan said that until this is done, Nigeria will continue to remain backward.

Also speaking, the chairman of the Port Harcourt Chamber of Commerce, Industry, Mines and Agriculture (PHACCIMA), Engr Vincent Furo, described the Public Private Partnership (PPP) programme of the government as a failure as the actual people are not being carried along.

Glo Opts Out Of Premier League