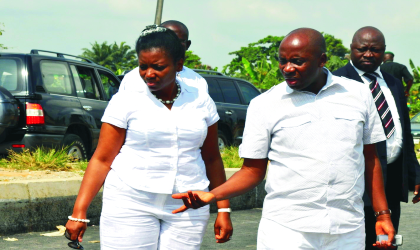 Governor Chibuike Rotimi Amaechi of Rivers State, explaining a point to his wife, Judith, at the Rumuokwuta/Choba project site, during an inspection exercise, yesterday.

Governor Chibuike Rotimi Amaechi of Rivers State, explaining a point to his wife, Judith, at the Rumuokwuta/Choba project site, during an inspection exercise, yesterday.

A galaxy of stars from Bollywood, the largest producer of movies in the world will for the first time meet their counterparts from Nollywood here in Nigeria as the ION film festival kicks off in Port Harcourt this week.

Top among the expected stars is Parminder Vir (OBE) an award winning film and television producer of drama and documentary from India.

She is expected to meet the likes of Zeb Ejiro, Chico Ejiro, Fiberesima, Stephanie Okereke, Sam Dede and Nkem Owoh all form Nollywood.

The ION film festival which is holding for the first time in Africa is taking a debut from Port Harcourt the capital city of oil rich Rivers State on December 9.

The meeting of these great actors and producers is made possible by the producer of IONIFF Port Harcourt ’09, Omcomm, which has also appointed Parminder Vir as programme Consultant to produce the section in connecting Bollywood to Nollywood.

Expressing her excitement to be part of the Port Harcourt film festival, Parminder said she is surprised at the positive reception Bollywood movies had enjoyed in Nigeria for over 50 years with audiences watching  Bollywood movies, embracing the songs, fashion and stories.

Her words, “I am always amazed at the ease with which Nigerians will call the names of the Bollywood Stars, the dialogue and even sing the songs given that this is not their language or culture.”

As part of the programme for the IONIFF, leading Bollywood producers will be invited to share their experience in the industry, its cultural and economic value, and explore collaboration opportunities for Nollywood producers to work with the Indian film industry.

There will also be a panel discussion on new models of financing media in terms of developing creative and financial partnerships and accessing new markets.

The synergy between both movie industries will also be buttressed by celebrating the stars of the world’s largest film industries by inviting a major Bollywood celebrity to attend the festival as guest of honour.

Meanwhile, in a bid to empower budding talents during the festival in Port Harcourt organisers of the film fiesta have announced the opening of entries for the workshop series scheduled during the international event.

According to Caterina Bortolussi, Creative Director of Omcomm, the workshop series registration started on October 1 and will close on October 30, to allow interested individuals submit entries for the workshop on Omcomm website.

The workshops which will be led by international recognised instructors in the world of cinema are open to filmmakers, students and creative minds from all over Nigeria.

Attendees of the 4-day programme will learn among other things how to develop a story from an idea and shop into screenplay, the basic techniques of digital cinematography and lightening.