Iran has said that it would build 10 more Uranium enrichment sites in retaliation to the International Atomic Energy Agency (IAEA) vote.

This followed a resolution passed by a 25-3 margin with six abstentions, smoothed by backing from Russia and China which have blocked global attempts to isolate Iran, a trade partner for both in the past.

Iran had proper co-operation with the agency’s board of governors, but the recent resolution calls for careful studies on the vote in parliament’s national security committee.

“Parliament will review Iran’s relations with these countries that votes for the resolutions against it.”

The IAEA board angered Iran last week by censoring it for covertly building a second Uranium enrichment plant over the holy city of Quorm, in addition to its main IAEA monitored one at Nataru, and called for a halt to construction.

“The West’s claim that Iran seaks nuclear weapons is a big lie. Iranian nation stays firm on its chosen part.”

The United States and its allies fear Iran’s nuclear energy programme could allow the leading OPEC producer to develop nuclear weapons, but Tehran says it has no such intention.

On Tuesday, a foreign ministry spokesman had said Iran would take unspecified legal action over the IAEA vote.

Iran has resisted a deal with western powers that would see its low enriched uranium sent abroad for processing into uranium for making fuel.

Western countries are brandishing the threat of more UN sanctions on Iran which could target is imports of gasoline. 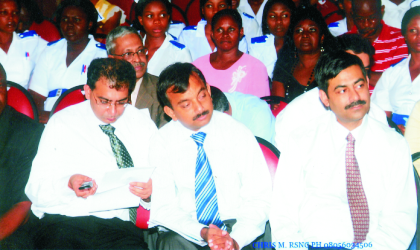 Cross section of participants at the Rivers State Heart Summit, organised by Ministry of Health in conjunction with Kanu Heart Foundation, in Port Harcourt, on Thursday. Photo: Chris Monyanaga