Furious reactions have trailed the reported pressure on the Vice President, Dr Goodluck Jonathan, to sign an undated resignation letter in the event of President Umaru Yar’Adua’s inability to continue in office as a result of his health condition.

Jonathan is reportedly under intense pressure from some hawks in the Presidency said to have the backing of some key Northern politicians.

The plot was said to have been hatched to forestall a situation where the Presidency would return to the South just two years after another Southerner, Chief Olusegun Obasanjo, left the office.

The Presidency has, however, described the alleged plot reported in a national newspaper Saturday as not only false, but also meant to cause panic and tension in the country.

Our correspondent learnt Saturday that already tension is mounting in the Niger Delta, where Jonathan hails from, with the Ijaw nation warning that they would not “take lightly” any threat or pressure on Jonathan.

Coordinator of the Ijaw Monitoring Group (IMG), Comrade Joseph Evah, who spoke to newsmen Saturday, said the Ijaw nation is on the alert over the alleged plot.

Said Evah: “We (Ijaw nation) will not take lightly any threat to undermine Jonathan or his office. We have heard of the plot and we are watching the situation.

“We are particularly worried that the President’s aide presented the 2010 budget to the National Assembly while the Vice President is said to be in charge. We believe that is part of the plot and the Niger Delta is alert. There is a clique working against the Vice President and let us see how those plotting such evil will undermine the Constitution.

“We are not saying that Jonathan should take over, after all the President is not dead. Indeed, we are praying for Yar’Adua and the Ijaw nation and the whole of Niger Delta people do not wish him dead.

“But we are disturbed that this is happening again now that the President is ill. The other time the President traveled to Saudi Arabia for medical treatment, a group, Northern Liberation Front, vowed to resist any move for Jonathan to assume the presidency. It even threatened to give him the (MKO) Abiola treatment.

“Also, a Peoples Democratic Party (PDP) chieftain from the North, Godwin Daboh, had said the North would not accept Jonathan if anything happened to Yar’Adua. What did the SSS (State Security Service) do when these national security threats were issued? We believe they are agents of a clique trying to foment trouble in Nigeria, and this time around we will not take it lightly.

“Those around Jonathan, I mean his advisers and aides, must realize that he is not representing his family. He represents a region just like the President is representing the North. So his office is important to the Niger Delta and we will do everything to protect it otherwise our children in generations to come would ask us what we did when a Niger Deltan for the first time in the history of Nigeria occupied that office.”

Another group, United Niger Delta Energy Development Security Strategy (UNDEDSS), equally warned that the Niger Delta might secede over the plot against Jonathan.

UNDEDSS’ Secretary General, Mr Tony Uranta, in a terse statement issued Saturday via SMS, called on Nigerians to remain law abiding but warned against any action that would undermine the 1999 Constitution.

The statement read: “UNDEDSS is calling all Nigerians to remain law abiding as citizens under the 1999 Constitution. Should any section of the nation decide to overthrow due process, every other section should immediately withdraw from the nationhood space. God is just and rights must never be trifled with.”

The Presidency has however moved to douse the tension, saying there is no truth whatsoever in the report that Jonathan is under pressure to resign following the hospitalization of President Yar’Adua for acute pericarditis.

The Presidency described the report as not only false in its entirety, but also sheer mischief designed to create unnecessary panic and tension in the country.

The Senior Special Assistant to the Vice President on Media and Communications, Mr Ima Niboro, said in a statement made available to State House correspondents in Abuja Saturday that it was an insult to the sensibilities of Nigerians, including the Vice President for anyone to come up with such a suggestion.

“The newspaper failed to state clearly who or what body was bringing this pressure to bear, but went ahead to insult the sensibilities of Nigerians, including the vice president himself by suggesting that Dr Jonathan is to be made to sign an undated letter of resignation… “which can become binding in the event that the president is unable to continue in office””, he further stated.

The vice president’s aide urged the public to discountenance the story, which, according to him, “dwells entirely in the imagination of its authors, their sponsors and co-travellers” and continue to support the Yar’Adua administration in its effort to reposition the country.

Niboro’s statement reads: “We have read with considerable dismay the story of The Punch published today, November 28, and wish to point out straightaway that it is false in its entirety, and designed to create unnecessary panic and tension in the country. This story, we must add, is sheer mischief, and dwells entirely in the imagination of its authors, their sponsors and co-travellers. 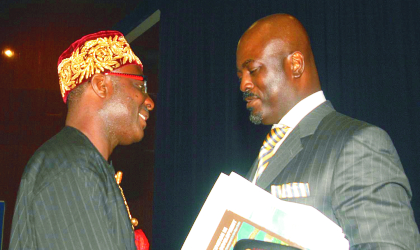