Rivers State Hon.Hon. Governor Chibuike Rotimi Amaechi has announced a 20 per cent increase in the number of Muslim Pilgrims from the state that would perform the Hajj from next year.

This brings the number of Muslim Pilgrims sponsored by the state government annually from 500 to 600.

Governor Amaechi announced this Saturday while addressing a delegation of Muslim faithfuls in the state, who paid him the traditional sallah visit at Government House, Port Harcourt as part of this year’s Eid-EI-Kabir celebration.

The governor, who lauded the high level of tolerance and healthy relationship among the various religious groups in the state, particularly commended the Moslem community for its peaceful disposition, and urged them to nominate members for the formal setting up of a Muslim Pilgrims Welfare Board, for the state.

He reminded them that his request for the setting up of the board since two years ago is long over due, saying that the Sole Administrator would continue to operate until they are ready to forward names of nominees for the board.

“It is not because I cannot set up the board, but I am not a Moslem, you are Moslems, so you decide who would be in the board”, Governor Amaechi told them, noting that he was transferring that responsibility in the interest of peace, as he promised to partner with them in any area.

The State Chief Executive pointed out that the Eid-EI-Kabir is an important celebration in the Moslem world, adding that as a Christian, he was conscious of the test God put Abraham through, and urged Moslems to emulate the faith and total surrender Abraham exhibited towards God in times of temptation.

Earlier in his address, the Rivers State Islamic Leader, Alhaji Ahmad Okiri, said the Eid-EI-Kabir was designed by God to assure us that we can achieve peace, unity and all-round progress if we obey his commandments, and commended Governor Amaechi for governing the state in that direction.

Alhaji Okiri expressed joy at the timely airlift of pilgrims this year, and the full resumption of Hajj operations from the Port Harcourt International Airport, attributing these to the commitment of government to ease the difficulties experienced by pilgrims.

The Moslem leader who also thanked the state government for embarking on massive development projects, its key role in the amnesty programme, urged the federal government to fulfill its amnesty obligations to the ex-militants. 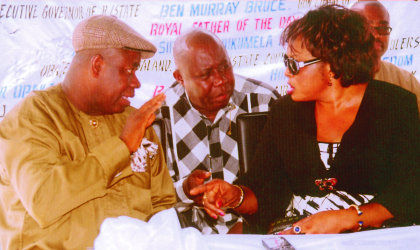