Rivers State Governor, Rt. Hon. Chibuike Rotimi Amaechi, has criticised local government chairmen in the state for poor performance, contending that only four out of the 23 council chairmen in the state scored above average in the assessment conducted by a committee headed by Dame Aleruchi Cookey-Gam.

Governor Ameachi who made the disclosure last Friday in Bori, during an interactive meeting with the Ogonis, charged local government council chairmen, particularly in Ogoniland to refocus their priorities to enable them deliver the dividends of democracy to their people.

Governor Amaechi said the state government had taken over the funding of primary education and primary healthcare services, which were the constitutional responsibilities of the councils, and urged the chairmen to tell the people what they do with the funds allocated to the councils.

The governor explained that since the third tier of government was the closest to the people, it behoved the council chairmen to tell the people the projects they were executing that justified their leadership of the various council areas.

He disclosed that the state government’s desire to give adequate account of its stewardship led to the setting up of an independent body to assess the performance of all the 23 local government councils of the state, revealing that only four chairmen, out of 23, performed above average.

The State Chief Executive however, lauded Gokana and Eleme council chairmen from the Ogoni axis for being among the four, and berated Khana Local Government chairman and his colleague in Tai for their poor performance despite the huge funds available to them.

The governor assured  Gokana and Eleme council chairmen that the state government would partner with them to provide more infrastructural facilities that would add value to the lives of their people.

Answering questions during the interactive session, Governor Amaechi advised Ogoni people to vote only for leaders that would have their interest at heart, while insisting that the present leaders should give account of the common wealth under their control.

In response to another question, the governor said the state Executive Council was working on a bill that would specify appropriate punishment for principals and head teachers of schools in the state that would fail in their responsibility to give students quality education, adding that the law when passed would also demand government to do its part to ensure improvement in standard of education.

The State Chief Executive assured the people that the government was working assiduously to ensure that the Ogoni area be connected to the national grid, to enable them have electricity before the Christmas festivities.

He used the occasion to appeal to Ogoni leaders to put the past behind them and unite by stopping all divisive tendencies that balkanized them years ago. 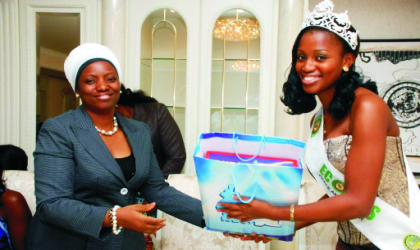