Both President Traian Basescu and his main rival, former Foreign Minister Mircea Geoana, described the election as one of the most important Romania has had since the 1989 fall of communism as they voted Sunday.

Yet reports of possible fraud emerged at some special voting centers.

Romania’s government collapsed last month amid squabbling between the two-party coalition and the International Monetary Fund has delayed access to the bailout loan while the country struggles to set up a new government.

The president is key to reviving the government, because he nominates a prime minister, whom Parliament must then approve and who would be responsible for forming a new coalition.

Basescu, who represents Romania’s political center, is running for a second five-year term, while Geoana heads the left-leaning Social Democrats and is head of the Senate.

More than 18 million Romanians are eligible to vote but none of the dozen candidates is expected to get more than 50 percent in the first round. Polls show Basescu with only a slight lead over Geoana, which means a runoff election is likely on Dec. 6.

Basescu, who no longer belongs to any party because of constitutional requirements, has lost some public support with his stormy relationship with parliament and a deep economic crisis.

Geoana favors a broad coalition government while Basescu wants to form a government from the Democratic Liberal party he used to lead.

Romania’s economy, already in a deep recession, is expected to shrink some 8.5 percent this year. The country needs the IMF loan to pay state salaries and pensions, but is unlikely to get it this year, which will force 1.3 million state workers to take eight days of unpaid leave in 2009.

Basescu also called a separate referendum Sunday to reduce the number of lawmakers and remove one parliamentary chamber. He wants a one-chamber parliament with a maximum of 300 lawmakers, down from the current 471.

There were reports of possible fraud Sunday at special polling places set up for exceptional cases in which people cannot vote where they live. After only six hours, more than 157,000 people had voted at such centers, far more than expected, and witnesses said people were being bused in to those centers after having already voted elsewhere.

Economy Minister Adriean Videanu called for a halt to “electoral tourism” in Moara Vlasie, near Bucharest, saying election authorities there were overwhelmed.

Basescu, 58, styles himself a patriot with a deep respect for Romanian traditions and an awareness of the concerns of average voters. Critics accuse him of associating with corrupt business people.

Geoana, 51, who served as Romania’s ambassador to the U.S. and then as foreign minister, lacks Basescu’s popular appeal but is seen as a clever negotiator. His Social Democratic Party is the successor to the Communist Party that ruled Romania for more than 40 years. 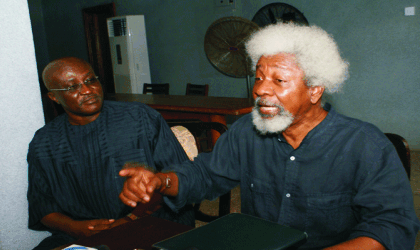 Prof. Wole Soyinka (right) briefing the press weekend in Lagos,on the state of the Nigerian Nation, with him is Mr. Tony Uranta. Photo: Idowu Ogunleye.