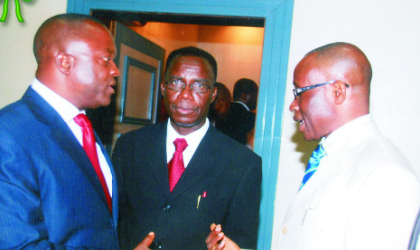 Rivers State was thrown into mourning yesterday following the death of a prominent politician in the state, Hon Charles Achor Nsiegbe.

Hon Nsiegbe, a former member of Rivers State House of the Assembly, currently Publicity Secretary of the People’s Democratic Party, South-South zone and board member of the Rivers State Bureau for Public Procurement died yesterday morning at Teme Clinic, Port Harcourt following an attack on him by a suspected gunman.

He was shot last Thursday night along Tombia Extension, near Clock Tower Hotel, GRA, Port Harcourt when the car he was being driven in was allegedly stopped by a man in mobile police uniform who ordered him to open the boot of his car for a search after requesting for his vehicle particulars.

The Tide On Sunday gathered that he was shot several times as he alighted from his bullet-proof jeep to comply with the police instruction.

Hon Nsiegbe was said to have left Saphire Hotels, owned by a top politician in the state, that night for his residence and was in the car with a popular Nigerian actor (name withheld) when the incident occurred.

According to a source close to the deceased, when the driver of the car noticed the shooting, he was said to have immediately sped off and thereafter made efforts to contact uniformed security agents about the incident while the gunman took to his heels.

On arrival, the source said, the security agents found the deceased lying in the pool of his own blood and quickly moved him to the Medicine Sans Frontiers quartered at The Teme Clinic in Mile One Diobu, Port Harcourt where doctors had battled to save his life.

The doctors in the hospital were said to have carried successful operations on him and visible signs of improvement were notice. The health of the late politician who was said to have eaten food and spoke to people Friday. However, his condition became more critical yesterday morning, leading to his death at about 10.00am.

News of his death attracted sympathizers, political associates and relations who besieged the premises of the hospital until his corpse was removed to Kpaima Mortuary where it was being deposited.

When The Tide On Sunday visited the deceased’s family residence along Abakaliki Street in Mile One, Diobu, Crowd of sympathizers and family members were seen crying and wailing over the death.

Some of the political associates who spoke to The Tide On Sunday expressed shock at the death and wondered the motive behind his killing. He was described as a gentle and friendly man who played politics with an open heart unlike most Nigerian politicians.

One of the respondents who pleaded anonymity said “this is one death that the police must unravel. Police must do everything humanly possible to track down those behind this dastardly act.”

When contacted yesterday, the Public Relations Officer, Rivers State Police Command, Mrs Rita Inoma-Abbey confirmed the incident. She also disclosed that one person who was driving in the car with the late Nsiegbe is being interrogated by the police.

Before he joined politics, about a decade ago, the late Nsiegbe had a stint with a bank and also worked with the State Security Services (SSS).

Until his death, he was the Publicity Secretary, PDP, South-South zone and also a member, Rivers State Bureau of Public Procurement.

He died in his early 40s and was married with four children.

Cultists Want to Kill Me … Imoke Cries Out