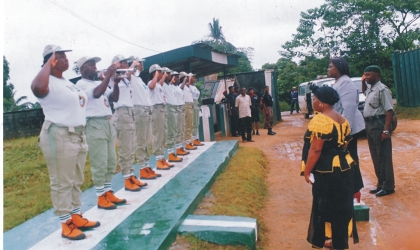 Barely two weeks after the killing of the Chief Security Officer (CSO) of the University of Port Harcourt (UNIPORT) Choba, Mr Amadi Wali during a robbery in the university, his Akpor kinsmen have accused the police of being responsible for the death.

The CSO’s incident came barely one month after the killing of the Paramount Ruler of Akpor Kingdom in Obio/Akpor Local Government Area, Rivers State, HRH Eze Badumeru Oriebe in his Ozuoba Palace by yet to be identified gunmen.

Teenage robbers had invaded the home of Prof Ozo-Mecuri Ndimele of the Department of Linguistics and Communication Studies of the university, hence the quick intervention of the security Chief, who died in the process.

In a four-page petition to the Inspector-General of Police, Ogbonnaya Onovo, dated November 9, 2009, members of the Apkor Council of Chiefs and Leaders of Akpor Youth Organisation (AYO) alleged that Mr Wali was felled by the bullets fired by the police who came to thwart the robbery attack

‘The Inspector-General Sir, all through the time the robbers took control of the  Prof’s house,  no gun was fired, and for over an hour, the police at Choba could not respond to distress call citing lack of fuel in their patrol van. So, when Mr Amadi Wali got to the scene, he had only one security man (not police) to work with. They identified themselves, exchanged work code and signals, Mr Wali positioned him behind the house while himself took position by the side from where he could see anybody exiting from the house. During this period, there was not one gunshot.

‘The police at Choba arrived belatedly and started firing gunshots. It was one or two of the several fires that killed Mr Amadi Wali where he was taking cover’, according to the letter.

The letter signed by 10 chiefs of the Akpor kingdom including the president of AYO, Mr Innocent Ogbonda-Nwanwu and Secretary, Mr Rejoice Wali claimed that the  head of the police team  sent a signal to their office that they had gotten one of the robbers and reportedly took Mr Wali’s corpse to their station.

The petitioners, among other things, want the police boss to institute an inquiry into Mr Wali’s death.

Meanwhile, the Vice Chancellor of the University, Prof Don Baridam and other top functionaries of the school had paid condolence visit to the family of the late CSO at Rumuosi, near the university.

But in a separate letter to the Vice Chancellor, dated October 5, 2009, leaders of AYO, Innocent Ogbonda-Nwannwu and Rejoice Wali demanded him to say all he knows about the death of Mr Wali, the immediate past president of AYO.

“We have known after diligent investigation that the  authorities of the university were in touch with the police team that stormed Prof Ndimele’s residence. It should therefore, open up to the world the content of the initial signals or messages the police sent across as situation report.

Failure to do this to our satisfaction amounts to covering up the killers of our own Amadi Wali’ the youth leaders demanded.

When contacted, the PRO of the university, Williams Wodi said the school was equally committed to the unraveling of the death of the CSO, whom he said  worked assiduously for the institution, adding that several unions had declared days of mourning for him.

Several telephone calls yesterday to the state police command spokesman, Mrs Rita Inoma-Abbey were not answered to get her response to the allegation.