Fourteen years after the gruesome execution of a human right activist and the leader of the Movement for the Survival of the Ogoni People (MOSOP), Mr Ken Saro- Wiwa, his dreams and memory are set to come alive in Lagos.

The ceremony which is to commensurate the fourteen years anniversary of Saro-Wiwa’s  death is scheduled to hold next Tuesday, the day the MOSOP leader was killed.

The remembrance ceremony for the murder of Ken Saro-Wiwa has become a yearly event as a reflection on the maltreatment and injustice meted out to the Ogoni people because of oil, which led to the murder of some prominent Ogoni people by the military junta of the late maximum ruler, General Sani Abacha.

In an exclusive interview with The Tide On Sunday in Lagos, the organizer of the Ken Saro Wiwa day and National Administrator, Ogoni Solidarity Forum, Mr Akpobari Celestine said that he was determined to bring to the fore the struggles and the vision of which the late human rights activist stood for.

Mr Akpobari who just came back from Paris told our correspondent at the Muritala Muhammed international Airport Lagos that he would not allow the struggle, ideas and values of which Ken Saro Wiwa stood for to die and that he was ready to carry on the struggle on till the Ogoni people are liberated and also, the murderers of Ken Saro Wiwa are made to face the world court for crimes against humanity.

Mr Akpobari promised to kick start the Ken Saro Wiwa day in Lagos, Abuja, Kano and other parts of the country until it becomes a national day as well as international day.

The Ogoni Solidarity Forum demanded that the government of Nigeria accepts responsibility for the atrocities committed in their land and apologies for same.

Other demands from the forum include the government of Nigeria to the legitimate demands of the Ogoni people as enshrined in the Ogoni Bill of Rights.

That the murder and conviction of Ken Saro Wiwa and other Ogonis be quashed, that the government of Nigeria and shell pay for the 35 years of oil theft in Ogoni land. That they both clean up the polluted environment. Others are that adequate compensation be paid to all families who lost their loved ones and that all those who took part in the genocide against unarmed Ogonis, be brought to book, and if dead their bones be exhumed to face trial.

The OSF leader, stated that with the support of the Movement for the Survival of Ogoni People (MOSOP), as their big umbrella, other affiliate organizations  like COP, COTRA, NYCOP was set to build a stronger MOSOP.

Some of the events built up for the fourteen years anniversary of the Ken Saro Wiwa remembrance day in Lagos include a world press conference, visit to the governor of Lagos state, Babatunde Fashola and a visit to Shell Headquarters at Marina among others. 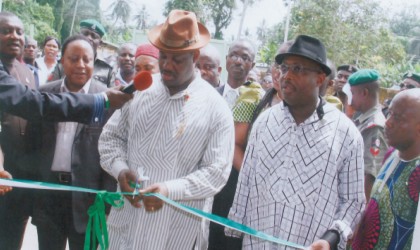