Former chairman of the Nigerian Ports Authority (NPA), Chief Bode George, who was jailed during the week, is fast adjusting to life in prison though sources claimed that he has fallen  sick.

It was gathered that though he was in high spirits following daily visits by members of the PDP, he developed high-blood pressure the day after he was brought to the prison.

He was said to have had a history of diabetes and the source said he came to the prison with his medication.

The source said the high-blood pressure had continued to be monitored by prison officials.

It was learnt that officials of the prison granted him the privilege of eating foods brought to him by his family members based on his status, as the source said in a normal situation, he was not allowed to eat any food except one provided by the prison.

Impeccable sources close to the Maximum Prison, Lagos, told newsmen that the former Deputy National Chairman of the Peoples Democratic Party (PDP) had started to observe various rules in the prison.

The sources said since he was brought to the prison, he had been allocated to a room where he now sleeps on a double-bunk bed with a fan. The source, however, refused to disclose the room number for “security reasons.”

According to our source, Chief George now takes his bath everyday in one of the bathrooms in the cell which he shares with the Chief Security Officer to a former Head of State, Major Hamza al-Mustapha.

The Tide On Sunday also gathered that the decision of some leaders of thought and chieftains of the PDP in the South West to have virtually turned the prison yard into a political arena since last Tuesday had made officials of the prison to do extra works.

Another top prison source who craved anonymity said that except the embattled PDP chieftain asked his people to reduce their visits to the prison, he and the others might be moved out of Lagos.

Some employees of the NPA were alleged to take delight in the current travails of Chief George.

Aside from the allegations that he misappropriated the funds of the Federal Government parastatal during his tenure as the chairman of the board of directors, he was said to be responsible for the termination of the appointments of about 10,000 workers of the organisation.

Another source who begged not to be named stated that some NPA employees and stakeholders had expressed displeasure at the guilty verdicts handed Alhaji Aminu Dabo and one Mr. Abidoye, other members of the board.

Meanwhile, insider sources within the Lagos State chapter of the PDP have said that nobody knew the roles of the immediate past president, Chief Olusegun Obasanjo, in Chief George’s travails.

The sources disclosed, however, that some powerful delegates, who were mainly mutual friends of Chief Obasanjo and Chief George, had been dispatched to the former’s farm at Ota, Ogun State, to plead with him on the possibilities of using his connections in the corridors of power.

The sources said it was yet unclear if the embattled PDP chieftain from Lagos State is also in good terms with Chief Tony Anenih, a former Minister of Works, who is said to be equally close to the former president during his eight-year tenure.

Meanwhile, prison sources have denied that the authorities were planning to allocate prison uniforms to Chief George and the others.

The denial came on the heels of a newspaper publication during the week that the politician and his “co-travellers” would soon be given prison uniforms and numbers.

In a related development, Justice Olubunmi Oyewole of the Lagos High Court sitting in Ikeja on Friday fixed Monday, November 9, for the hearing of the bail application filed by counsel for Chief George and the others convicted along with him. 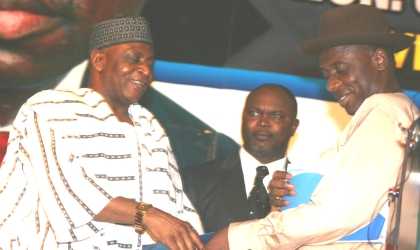