Former General Manager of the Rivers State Newspaper Corporation and elderstatesman from Okrika, Mr Amabipi Martins has raised alarm over a spurious newspaper publication linking him to an alleged fraud being perpetrated under the auspices of the Wakirke Publicity Committee over the Okrika Waterfront palaver.

Since after the publication, Elder Martins said he has been receiving strange calls threatening his life by individuals who see him as an enemy to the Okrika cause.

In a petition the former general manager of RSNC made to the Nigerian Union of Journalists and Rivers State Independent Publishers Association (RIVPA) and made available to The Tide, Elder Martins said there was no iota of truth in the said publication.

Elder Martins, who frowned at the papers inability to adhere to basic journalism principle of balanced reporting noted there was no attempt whatsoever by the newspaper to substantiate the allegations, adding, “ the whole exercise was a criminal effort to cast a stigma on the noble profession of journalism”.

According to him, since after the publication of the said story, I have been under severe stress and pressure from anonymous calls, threats to my life and threat from unknown persons who perceive me as enemy and saboteur of the cause of the Okrika people in their disagreement with the Rivers State Government over the proposed demolition of the waterfronts in Port Harcourt”.

The Okirka born veteran journalist while calling on NUJ’s committee on Ethics and Discipline to take a critical look at the matter called for appropriate disciplinary action to be taken on the newspaper following the psychological and emotional trauma he had been subjected to.

The newstory tagged, “ Wakirike Publicity Committee Scandal. And published by the Weekly Star, a local Port Harcourt tabloid had alleged that the former RSNC boss with other members of the committee had decided to fleece their kinsmen in the cause of the waterfront demolition plans by the state government.

Elder Martins described the newspaper which published on 10th August 2009, “ as a collection of quack writers who are always available to carry out the biddings of character assasins that a bound in our society. 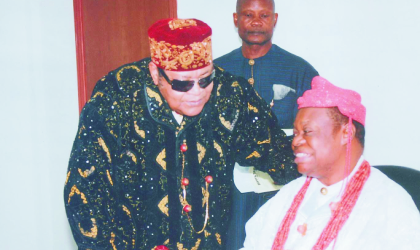 Sir Dr Chukwumela Nnam Obi II Eze Ogba of Ogbaland and Chairman, Rivers State Council of Traditional Rulers (right) listens to Amayanabo of Opobo, King Dandeson Jaja at the office of the Speaker, during a courtesy visit to the Speaker of the State Assembly by members of the council of traditional rulers, recently. Photo Chris Monyanaga