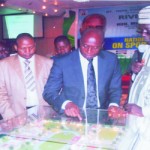 Militants in the Niger Delta said yesterday they carried out a pre-dawn attack against Royal Dutch Shell facilities in a warning to Russia not to invest in the country’s oil and gas industry. The Movement for the Emancipation of the Niger Delta (MEND) said the attack was to coincide with a visit to Nigeria by Russian President, Dmitry Medvedev during which major energy investment deals were struck. The attack on Bille-Krakrama pipeline, which feeds the key Bonny export terminal in southern Rivers State, was carried out shortly after midnight yesterday. “This is the fate that awaits the gas pipelines you plan to invest in Nigeria if justice is not factored in the whole process,” MEND said in a message to Medvedev sent in statement to the media. Shell confirmed it had received reports of an attack on its pipeline at Krakrama. “The facility has been shut down and an emergency team has been mobilised to limit the environmental impact,” Shell spokeswoman Caroline Wittgen said. MEND, the main militant group in the oil-rich southern Nigeria, stages regular attacks on oil installations as part of its campaign for a fairer share out of oil wealth for locals in the Delta region. Nigeria’s oil production has been cut by a quarter over the past three years because of the attacks. President Umaru Yar’Adua on Wednesday expressed hope he could resolve the Niger Delta crisis this year. “I am hopeful and confident that by the end of this year, we will have a secure and stable environment in the Niger Delta,” he told a news conference with Medvedev. Yar’Adua was expected yesterday to unveil details of an amnesty package for militants who cease hostilities as part of efforts to end the unrest and save the crucial oil and gas industry. In a first visit by a Kremlin leader to the west African energy powerhouse, the two countries signed a draft of agreements, with Russian gas giant Gazprom unveiling plans to link vast reserves in Nigeria to Europe via a Trans-Saharan pipeline. Russia’s natural gas monopoly Gazprom International and the Nigerian National Petroleum Corporation (NNPC) established a “50-50” joint venture in oil, gas, gas processing and transportation, Gazprom chief Boris Ivanov said. The move is part of Gazprom’s drive to reinforce its position as a cornerstone supplier for Europe and North America. Gazprom plans to start construction from next year on the first 360-kilometre (200-mile) stretch of the ambitious 4,128-kilometre Trans Saharan gas pipeline from Nigeria to Europe, via Niger and Algeria. At the end of his visit late Wednesday, Medvedev said Russia was ready to invest billions of dollars in Nigeria, as Moscow flagged up its bid to challenge Chinese and Western influence across Africa. “The prospects are very good,” the Kremlin chief said. Russian potential investment in the Nigerian energy sector could be worth “billions of dollars.” But MEND warned “the agreements that you have signed in Abuja are worthless. MEND will ensure to that.” “We would rather you sign agreement with every state under true federalism to develop the potentials that the nation has, from solid minerals to agriculture and not just a focus on oil and gas from a single region,” said MEND. Nigeria’s daily oil output currently stands at 1.8 million barrels, according to the June report of the International Energy Agency, considerably lower than the 2.6 million barrels a day produced in 2006.