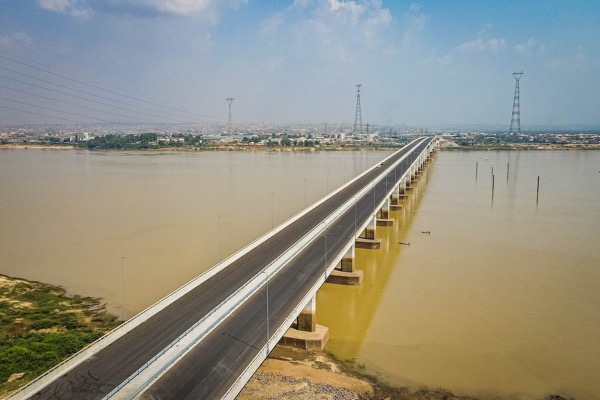 After four years of consistent construction work by Julius Berger, the multi-million naira 2nd Niger Bridge connecting the western and eastern parts of the country was finally opened to traffic, yesterday, with the people residing around Onitsha and Ogbaru areas of Anambra State expressing joy at the development.
The Federal Government ordered the opening of the bridge for use starting from midnight on Thursday.
But it was until around 9:50am, more than 10hours later, when the first vehicle rode on the Second Niger Bridge.
According to a government official, who spoke to newsmen, the delay was as a result of some adjustments on the roads linking the bridge.
Most of those who spoke said they would open restaurants in the area as the interchange would soon become the hub of business around the Idemili and Ogbaru axis of Anambra State.
The first driver to pass through the bridge, Sunday Emem, expressed his delight, saying, “I feel so happy, at least it will reduce the hold-up. We’ve stayed over one hour at the other bridge”.
The second driver to pass through the bridge, Obinna Eze, urged the President Muhammadu Buhari administration to complete it before May.
“It is a reality, though it is not 100percent complete, so far what we are seeing is impressive. We commend the present administration and we hope they complete it based on the time frame”, Eze said.
Last week, the Minister of Works and Housing, Mr Babatunde Fashola, SAN, disclosed that the bridge would be open to traffic from December 15, 2022 to January 15, 2023 to ease the experience of travellers during Yuletide break.
Fasholagave the indication, last Wednesday, during the inspection of the bridge, saying that the test run on the bridge would last from December 15, 2022 to January 15, 2023.
As soon as officials of the Federal Ministry of Works removed the barriers to enable vehicles to drive on the bridge, residents of Odekpe in Ogbaru and other people plying the Onitsha-Owerri expressway jumped up in excitement, and hailed President Muhammadu Buhari for his commitment towards the completion of the project.
It was gathered that many traders are already acquiring spaces down the bridge along the Obosi interchange in Onitsha for various kinds of business.
The 1.6kilometers-long bridge links Anambra and Delta states.
It was first proposed during the 1978/79 political campaign by then-candidate Shehu Shagari of the National Party of Nigeria.
However, in August, 2012, the Federal Executive Council under President Goodluck Jonathan approved a contract worth N325million for the final planning and design of the bridge.
A complicated procedure continued under President Muhammad Buhari, who first cancelled the earlier contract in August, 2015.
The administration, however, resumed the contract on September 1, 2018.