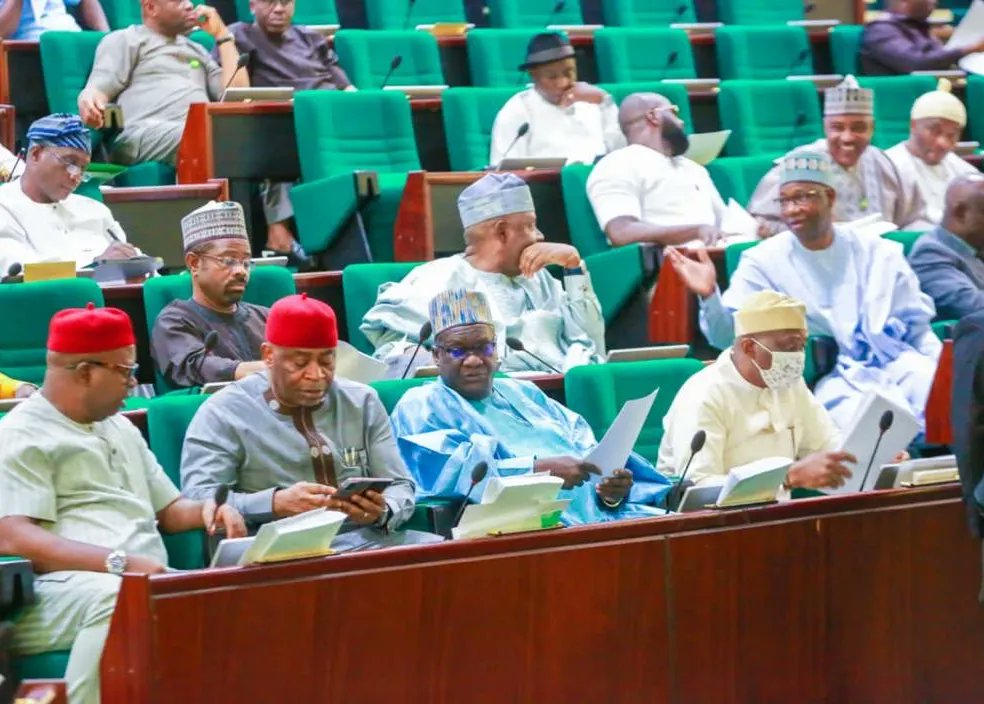 House of Representatives is to probe the Independent National Electoral Commission (INEC) over the implementation of the Electoral Act 2022 as well as the process in the ongoing voter’s registration exercise.

It also resolved to probe alleged constraints encountered by the commission on timely procurement and production of voter’s cards for the 2023 general election.

The Green chamber is also to interrogate the voting process from accreditation to transmission of results, so as to “ascertain the existence of a central INEC server, the transmission of results from polling units, the existence of e-collation officers and the ability to manipulate voting results at that level, ability or not to manipulate the BVAS machine.”

This followed the adoption of a motion by Mark Gbillah calling for an investigation into “the accountability of INEC electoral process, including its Interpretation and Implementation of the Electoral Act, 2022.”

Consequently, the House mandated its Committee on Electoral Matters to undertake the probe and report back in eight weeks for further legislative actions.

The committee in the course of its assignment is expected to ascertain a proper interpretation of Section 115(d) and other provisions of the 2022 Electoral Act by the electoral body and its key officials.

It is also to determine whether or not any infraction had been committed by the Resident Electoral Commissioner(REC) in charge of Akwa Ibom State, and any other INEC staff in their interpretation of the Electoral Act.

The committee is equally expected to probe “existing due process in decision making by INEC with regards to guidelines, regulations and whether any of such decisions conflict with the provisions of the Act.”

Gbillah, in his motion, said there were concerns about alleged short comings in the conduct of the recent off-season elections in Ekiti and Osun states.

The lawmaker said there were fears about the ability of the commission “to conduct free and fair elections in the forthcoming 2023 elections when voting will be required to take place simultaneously across the country.”

He said some of the concerns include: “INEC insistence on terminating the ongoing voters registration exercise regardless of the millions of Nigerians who will be disenfranchised citing the need to produce voters cards on time; allegations that results from polling units are not actually transmitted directly to INEC’S central server in Abuja as claimed by INEC but are collated on computer’s bye-collation officers at the ward levels across the country, who are the ones who transmit the results from their systems to the central server and are able to manipulate the votes cast for each candidate at that level but not the number of accredited voters.

“Other concerns about INEC lack of entrenched due process in decision making which sees it make and change guidelines and regulations arbitrarily to the benefit of certain political parties and sometimes in conflict with provisions of the 2022 Electoral Act.”

Ayokunle Bows Out, As Okoh Takes Over As CAN President

A non profit organisation, CVG-AFrica, has urged the three tiers of government and other stakeholders in the education sector to place more value on children through qualitative education, infrastructure and development of teachers’ capacity.
Its Coordinator, Mr Moses Solanke, made the plea on Monday at a seminar organised for teachers of St Leo’s Primary School, Ibadan, with the theme: “Sustaining a Valuable Primary Education: The Teachers’ Role”.
Solanke said the group’s aim was to reach out to those in the primary schools in order to encourage them because of the challenges inhibiting teaching in schools.
“We see that many teachers are no longer committed and dedicated to their works and this rubs off on the children.
“CVG-Africa is an outreach focusing on children’s education, but that cannot be without focusing on the teachers.
“So, the seminar is to help them to rediscover their roles and boost their commitments in a hostile environment.
“Schools are not funded, the structures are bad; you expected so much from the teachers, but once in a while we need to encourage and charge them to revive their commitment to work,” he said.
The group coordinator said that there was a need to value children to develop African continent.
“You can only place value on the children through qualitative education.
“CVG-Africa is asking the government, schools and other stakeholders in the education sector to place more commitment and value on children for a better society and continent,” he said.
In a lecture on the theme of the event, the Coordinator, Students and Youths Discipleship Outreach (SAYDO), Mr Elijah Olatunji, said, “No nation can be greater than her teachers; and there is no generation that can be different from what its teachers are.”
Olatunji enjoined teachers to see their roles as a calling and pour themselves into it with dedication and commitment to make a positive impact in the lives of their students.
According to him, it is hard to imagine what the world would look like without teachers.
“Teachers at all levels are indispensable in the society; from the nursery and primary school level to tertiary level; even in the vocational apprenticeship area,” he said.
Olatunji described teachers as the most powerful influencers, saying that teachers’ roles are crucial to bring about a change and development in any society.
“Teaching profession is not just a job; it is a calling and also a passion; a calling to affect lives; a passion to mould lives, to bend and straighten lives at the prime of their years. It is a calling as a foundation layer and builder,” he said.
The outreach coordinator advocated teaching methodology that would address the peculiarities of every child and the one that discovers and enhances their potential, saying, “no child is a dullard” .

A group, the High Level Women Advocate (HILWA), in collaboration with the UN Children’s Fund (UNICEF) has begun training of 200 female principals, Head teachers and teachers in Katsina State on menstrual hygiene management.
The HILWA Chairperson, Hajiya Mariya Abdullahi, said during the opening of the three-day training on Sunday in Katsina, that the selection of the topic ‘`Menstrual Hygiene” was necessary.
She explained that the topic was purposely selected  because of its sensitivity and importance especially to the girl child.
“We selected these principals and teachers for the training, because the girls are directly under their watch.
“Therefore, it is very important to train them so that they can also teach the girl child.
“This menstrual hygiene is important for the girl child to learn right from their childhood.
“Most girls find themselves in this situation without being prepared for it.
“So, we are preparing them in the event they see anything like this happening to them, they should not take it as a surprise”, she said.
She said that though parents ought to teach their daughters about menstraution, but that if they  howver failed to do so in their homes, the girls should be taught in school.
Mariya said that the group had the Girl’s Education Project (GEP-3) benefiting schools in the state to assess the level of successes so far recorded.
Also speaking, the HILWA Secretary, Hajiya Wasila Sani-Saulawa, said the training was targeting all principals of girls secondary schools in the state.
She added that the project was funded by the Foreign, Commonwealth and Development Office (FCDO) and implemented by UNICEF in collaboration with the Federal and state governments.
According to Sani-Saulawa, the training for the principals is also funded from the GEP-3 funding in Katsina State.
Sani-Saulawa said that 100 participants were drawn from the Katsina zone, while 50 each from Funtua and Daura zones would also benefit.

She explained that at the end of the training, the participants would not only step it down to their girl students, but also their children, family members and their community members.

According her, HILWA, since inception has been involved with the girl child education in Katsina state because the state is among the states with low number of girls in schools.

The Federal Government says the Agro-Climatic Resilience in Semi-Arid Landscapes (ACRESAL) project is critical to lifting 100 million Nigerians out of poverty.
The Honourable Minister for Environment, Mr Mohammed Abdullahi, said this at the ACRESAL technical workshop in Lagos.
The Tide’s source reports that the workshop is organised for the Ministries of Environment, Agriculture and Water Resources in conjunction with the World Bank.
“The ACRESAL Project is one of the central components in President Muhammadu Buhari’s strategy of ensuring environmental sustainability.
“And improving community livelihoods toward lifting 100 million people out of poverty,” Abdullahi said.
He said that his passion for the ACRESAL project exposed him to further understand the environment portfolio and its link with the broader society.
“I am also very passionate about ACRESAL. It is the first project that heralds my assumption of duties when Mr President redeployed me to the Federal Ministry of Environment.
“I saw the political will and desire of the three ministries in ensuring that targets are meant,” Abdullahi said.
According to him, ACRESAL is all about sustainable land management.
He said the ministry was deliberate in inviting stakeholders from the National Parks Service and the Great Green Wall Agency to engage with the World Bank to ensure the success of the project.
The Minister urged the Project Management Units (PMUs) from the different states to be ‘diplomatically independent’ in their relationship with their state governors.
He added that the ACRESAL project had the mandate to ensure land restoration, wetlands cultivation for the improvement of the land to make them fit for cultivation.
He continued that the ACRESAL would strengthen Nigeria’s long-term enabling environment for an integrated climate-resilient landscape.
“I am here to motivate and energise you, and also to encourage you to deliberate on the Draft Annual Work plan prepared by the various PMUs and clears same for onward transmission to the steering committee for approval.
“This is the much-needed step that will kick start disbursement of funds by the World Bank for implementation activities to begin,” Abdullahi said.
He expressed gratitude to Dr Joy Agene and her team from the World Bank on their efforts toward the full implementation of the ACReSAL project.