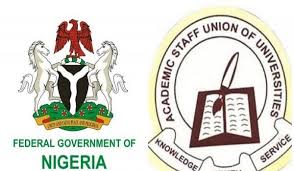 The Prof. Nimi Briggs-led committee set up the Federal Government to renegotiate the 2009 Agreement signed by the government with the Academic Staff Union of Universities (ASUU) and put an end to the ongoing industrial action by the union, has failed to meet the three-month timeframe given it by the Federal Government to conclude its assignment.
The committee, which was inaugurated by the Minister of Education, Malam Adamu Adamu, on March 7, was given three months to conclude its assignment.
It was gathered that Adamu gave the committee the go ahead to continue its negotiation with the union since there seemed to be some progress even though nothing concrete was agreed to within the time limit
Therefore, the committee is expected to continue the negotiation with the union later this week after the public holiday.
When contacted, the National President of ASUU, Prof. Emmanuel Osodeke, confirmed that his union would still meet with the committee later in the week.
“We have been meeting and we are still going to meet later in the week after the public holiday. We are always available for meetings and negotiations. If the committee was given a time frame within which to work, that is not an issue that should bother us,” he said.
Asked whether any progress has been made so far in the course of their meetings, Osodeke replied in the affirmative, but added that in due course whatever they arrive at would be made public.
Also speaking, Briggs explained that the outcome of the renegotiation would be made public at the appropriate time.
Adamu inaugurated the committee to find a lasting solution to the incessant strike by ASUU and other staff unions in the university sector following the inability of the government to implement some aspects of the 2009 Agreement signed by the two parties.
The government is blaming the paucity of funds for the inability to implement some aspects of the deal, while the union is accusing the government of not getting its priorities right.
The Briggs committee also has as members the Pro-Chancellor, Federal University, Wukari, Lawrence Ngbale (representing North-East); Pro-Chancellor, Federal University, Birnin Kebbi, Prof. Funmi Togunu-Bickersteth (South-West); and Pro-Chancellor, Federal University, Lokoja, Sen, Chris Adighije (South-East).
The Pro-Chancellor, Federal University of Technology, Minna, Prof. Olu Obafemi (represents North-Central); Pro-Chancellor, Kano State University of Science and Technology, Prof. Zubairu Iliyasu (North-West); and Pro-Chancellor, Niger Delta University, Wilberforce Island, Matthew Seiyefa (South-South).
ASUU has been on strike since February 14 over the adoption of the Integrated Personnel Payroll Information System (IPPIS) as the payment system in the university sector, poor funding of the sector, non-payment of salaries and allowances of some members, the inability of the government to also pay Earned Academic Allowance (EAA), proliferation of universities, among others.

2023 Polls Must Be Free, Fair In Abiola’s Honour, Buhari Commits