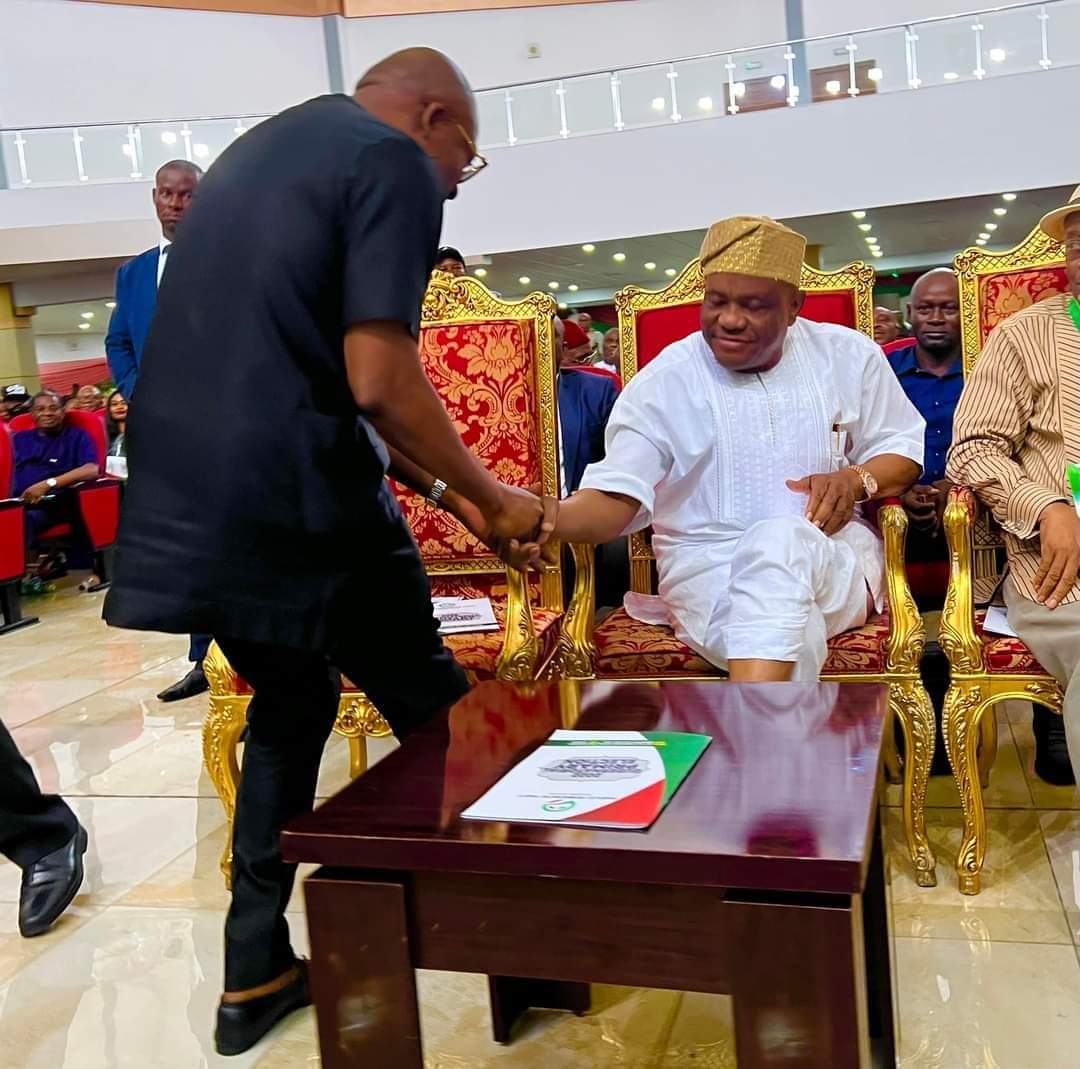 The recent election of the former Accountant General of River State, Amaopusenibo Siminialayi Fubara, as standard bearer of the Peoples Democratic Party (PDP ) in the forthcoming 2023  governorship poll has been described as good omen for the party in the state.
The Executive Chairman of Opobo/Nkoro Local Government Council, Dr. Enyiada Cookey- Gam, stated this while speaking with The Tide in Port Harcourt, recently.
The local council boss described Fubara as a square peg in a square hole and worthy of the ticket, noting that his emergence was well deserved.
According to him,’’Based on what we know about Amaopusenibo Siminialayi Joseph Fubara, we make bold to say that his election as the flagbearer of the Peoples Democratic Party (PDP)in the state is a case of putting the right person in the right position.”
He described the former Accountant-General of the state as a reform minded administrator who has all it takes to reform Rivers State and make it the pride of Nigeria in particular and Africa in general,
‘‘Amaopusenibo Simiinialayi Fubara is well prepared  for the task of breathing a new life into the mainstream of the state”, he said, adding that Fubara is reputable authority in corporate business strategy and government relations who acquitted himself creditably in all his previous engagements, including as Director of Finance, Government House, Port Harcourt, permanent Secretary and Account General of Rivers State.
‘‘Fubara is a distinguished administrator par excellence who has served at all levels of government in Nigeria be it local, state and national, and is fast establishing himself as a national reference material on administration and management policy matters,” Cookey-Gam said.
The council chairman who expressed confidence in Amaopusenibo Fubara’s capacity and ability to further the developmental strides of Gov Nyesom Wike urged Rivers people and those resident in the state to continue to support him and guarantee his victory at the 2023 general elections.
While assuring the PDP flagbearer of the support of Opobo /Nkoro electorate in next year’s polls, Cookey-Gam commended the party delegates who elected Fubara at the primary for doing what was right for the good of all and sundry, adding that their action was “right step in the right direction”.

The National Youth Leader of the Peoples Democratic Party, PDP, Muhammad Suleiman, has enjoined Nigerians, especially youths to troop out, collect their Permanent Voters Cards and vote out the All Progressives Congress which he said has brought nothing but misery to citizens.
Suleiman made the appeal at a media briefing ahead of the PDP PVC collection sensitization road show, scheduled to commence in Abuja, on Tuesday.
He said, “Indeed, we can no longer deny or pretend that we are now at the start of the lowest point in our national life.
“The youth of our country have become weary of the future. It is on this note that we call on all Nigerians to go out and get their PVC because this is the only tool to unseat them, these monsters are the corridors of power.
“The rate of insecurity is alarming and calls for urgent national attention. Ladies and gentlemen, the Nigerian students have been out of school for over five months, with no solution in sight.
“The APC led federal government has paid deaf ear to the plight of the Nigerian students, thereby forcing them to roam about the street and become vulnerable to negative tendencies.
“It is therefore imperative for the Nigerian youth to go out and get their permanent voters card in order to use their vote to unseat the wicked APC led federal government. “
The youth leader further said, “The persistent insecurity that has plagued the nation now for a while with no solution in sight is another manifestation of the complete incompetence and abandonment of government by the All Progressive Congress-led federal government.
“We call on all well meaning Nigerians to take up their destinies in their hands and activate the office of the citizen by going all out to get their permanent voters cards.”
He assured Nigerians that the PDP on its part was prepared to give Nigerians quality leadership at all levels when given the chance.
Also speaking during the event, the PDP National Woman Leader, Prof. Stella Effah-Attoe, urged Nigerians especially women to collect their PVCs.
She said, “Your PVC is your power to determine your future and the destinies of your family members.
“Take it seriously and use it wisely. No one will use his own hands to destroy himself. It is not enough to register.
“Please ensure that you physically collect your PVCs. On Collection of your PVCs, it is not enough to dump them in your drawers and wardrobes, ensure that you make effective use of the PVCs by coming out en mass to vote in the forthcoming General Elections in 2023”.
Acting National Chairman of the party, Alhaji Umar Damagun, in his remarks, said the PDP was now more than ever before resolute in its determination to provide leadership for Nigerians to rescue the nation from the precipice which the APC has led it to over the last seven years.

The governorship candidate of the Peoples Democratic Party, PDP, in Cross River state, Sen. Sandy Onor has unveiled ex-Channels ace broadcaster, Emana Duke Ambrose-Amawhe as deputy governorship candidate for the 2023 elections.
The Tide source gathered that there has been internal squabble on the selection of a deputy governorship candidate but her unveiling has put all that to rest as the party can now forge ahead in unity with its quest to take over leadership of the state in the 2023 general election.
Speaking during the unveiling at the PDP Secretariat, Mary Slessor Rd, Calabar, Monday, Sandy said in the quest for a deputy governorship candidate they consulted stakeholders widely in a bid to ensure that everyone was carried along and on board with the decision to pick Emana as running mate.
He said that there were no 100 per cent decisions in politics adding that everyone would sooner or later accept the choice they have made because of the painstaking consultation they embarked on.
His words: “When you make up your mind to lead it means you are ready to serve, leadership is service. The decision to pick Emana was a “double-barrel proposition” considering her youthfulness and gender.
“In taking the decision, there was no segment of the party that was not reached; men, women, youths, leaders, elders amongst others.
“We came to the conclusion that there is need to brighten up and strengthen our ticket. If you are a politician, you will know that you can’t mobilise without women.
“Since the time of Cecelia Ekpeyong as deputy governor, we have not been carrying the women along again. So, we came to the conclusion that we need to carry our women along again.
“To simply put it, all the men who available for the position were adequately qualified but we thought that we should not be selfish. Women cannot just be chair leaders all the time, they need to be given a pride of place.
“We needed a double-barrel proposition, a woman that can appeal to the youths, a mother, visionary and a deep intellect who will be determined to work to change Cross River for good and take the state to where it ought to be.
“We find all these qualities in Ambrose-Amawhe. She has momentum, vision, resilience, integrity and character. She is a woman of double-barrel proposition,” Onor said.
In her acceptance speech, Emana described her nomination as victory for every hard-working woman, stating that she was ready to go on the journey with her principal to rescue the State from lack of governance.
“Women must be resilient and never give up on their dreams, the ticket does not belong to me, it is yours, it belongs to the people who have only given it to me to hold in trust for them.
“Let us keep aside our misgivings, and take back our dear state, Sen Sandy Onor and myself cannot do it alone, we need your support, we need you to achieve a new Cross River of our dreams,” she stated. 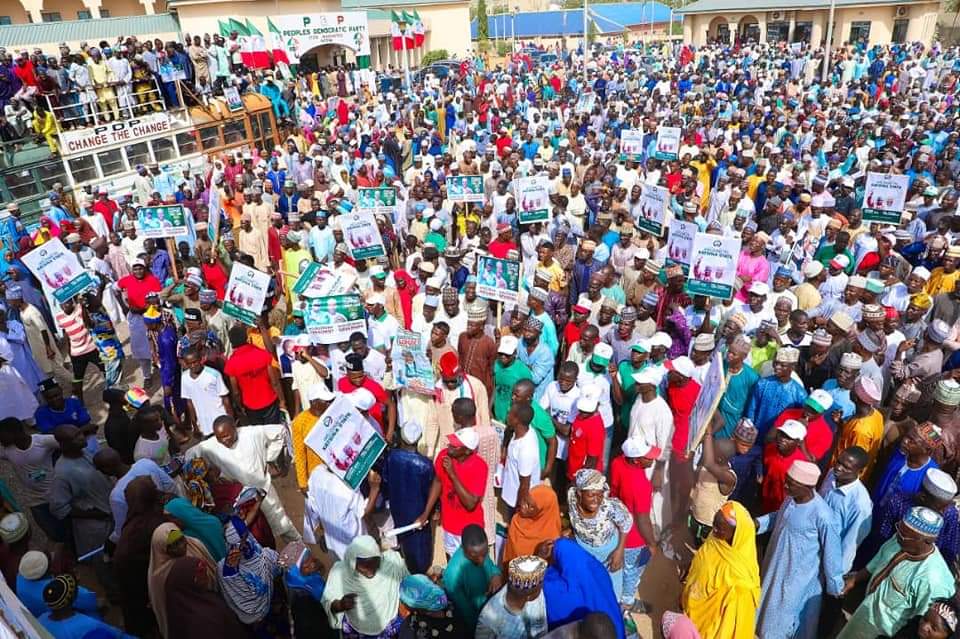