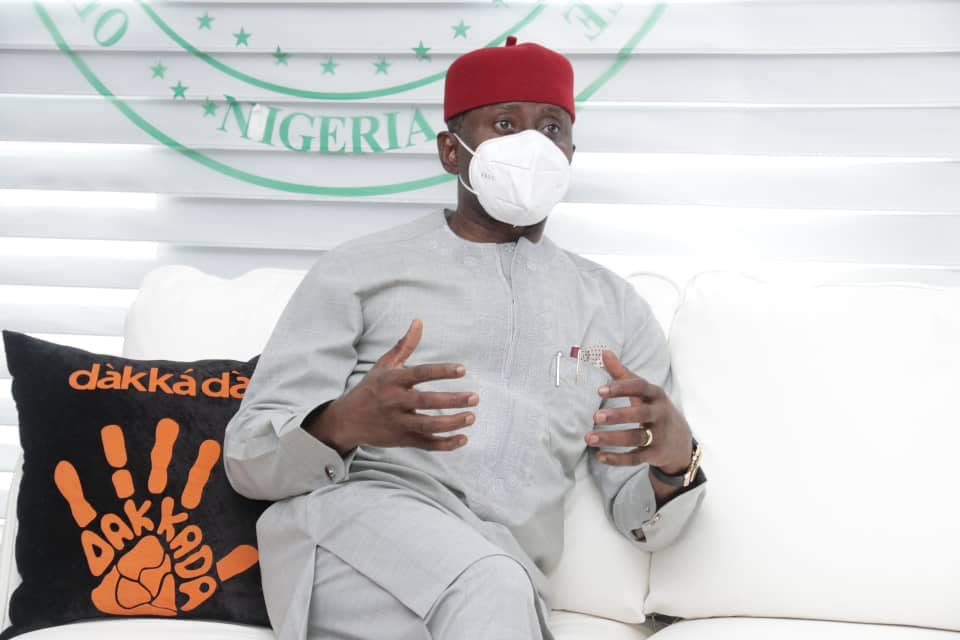 Delta State Governor, Senator Ifeanyi Okowa, former governors, Chief James Ibori, Dr Emmanuel Uduaghan, and other leaders of Peoples Democratic Party, PDP, in the state, have commenced formal talks on zoning (rotation) or otherwise of the party’s 2023 governorship ticket.
They opened formal discussions on the touchy matter, last Friday night, at a caucus meeting of Delta PDP leaders, an event that preceded weekend’s mega rally of the party at which a former state chairman of All Progressives Congress, APC, and thousands of APC faithful across the wards, local government areas of the state , decamped to PDP.
However, after the first round of deliberations on zoning, the only matter laid on the table by the state chairman, Chief Kingsley Esiso, for the caucus to take a decision, the party deferred the discussions to a later date.
Senator James Manager representing Delta-South senatorial district, a governorship aspirant of Ijaw ethnic extraction, sturdily opposed zoning of the party’s 2023 governorship and found support in a former state chairman of the party, Chief Edwin Uzor and Deputy Governor, Deacon Kingsley Otuaro, also Ijaw and gunning for governor.
“Senator Manager was emphatic that the party had never zoned governorship in the state since formation and no matter the situation, Ijaw would contest PDP governorship ticket in 2023. The deputy governor adopted the same position,” a Delta PDP caucus member, who attended the meeting told Vanguard.
It was gathered that former female governorship aspirant and member, Board of Trustees, PDP, Dame Dr. Esther Uduehi and Senator Stella Omu spoke in favour of zoning of the party’s governorship ticket and commencement from Delta Central senatorial district in 2023.
“In fact, Minority Leader, House of Representatives, Hon. Ndudi Elumelu, slammed those opposed to zoning and asked leaders of Delta Central to put their house in order just as Governor Okowa has put his house in order in Delta North senatorial district.
“Former Minister of State for Defence, Dr Roland Oritsejafor, insisted that zoning has brought stability and peace to the party and should be embraced by the party. ”Also, former Minister of Information, Prof Sam Oyovbaire, Deputy National Organising Secretary of the party and Chairman, Delta Central, DC-23 lobby group, Chief IghoyotaAmori, also spoke on the matter, of course supporting rotation of governorship to Central senatorial district in 2023.
“Former governor, Dr Emmanuel Uduaghan stressed the need to take decision on zoning of 2023 governorship ticket of the party quickly so that some of the governorship aspirants already campaigning would know their bearing and whether to call it quit, not after expending huge fortune on campaigns.
“His predecessor, Chief James Ibori, sued for understanding, patience and working together of members of the party to achieve greater result,” a source confided in our source.
We gathered decision would have been taken on the matter, last Friday, but for Governor Okowa, who said the leaders should not be in a hurry on the issue and consequently ruled that further deliberations on it be deferred to the shortest possible time for a fuller caucus to thrash it out.
“You know that in such a meeting, when the governor has ruled on a matter, nobody speaks on it again, which was where it ended until me meet another time,” our source added.