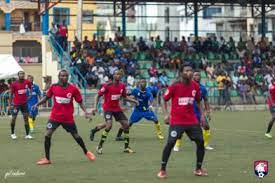 The Head Coach of Awoba Stars FC of Bille in Degema Local Government Area of Rivers State, Balasama Bruce, has attributed their 2-0 victory over  Kebetrache  at the ongoing Rivers State Keves Football Competition (RSKFC) to determination and hard work.
He stated that his players knew the importance of the game, consequently, they were determined to ensure that they won.
Bruce said this on Monday in a post match interview with sports journalists shortly after they defeated Kebetrache FC 2-0 in their first group match at the Sharks Football Stadium in Port Harcourt.
The coach  revealed that he registered his club  in the tournament majorly to expose his players to limelight, adding that they were prepared for the competition, as they  played several friendly matches and tournaments.
He lamented that, coming all the way from Bille to Port Harcourt for a competition was not an easy task because there was no major sponsor.
“I want to say that  understanding, hardwork and determination were responsible  for our victory.
Awoba Stars FC is an  old football club in Bille, but lack of sponsorship is making the club go up and down.
I am appealing to well meaning individuals and corporate organizations to come to our aid, because logistics,  transporting players and Officials from Bille to Port Harcourt is not easy in terms of finance,” Bruce said.
Also speaking, one of the goal scorers, Joel Gyang, expressed joy to see  net for the first in a high profile competition.
“I thank God for the victory, it is what we planned for.
I think today’s game is over our next target is to win the next game for us to qualify in our  group,” Gyang said.
He used the medium to appeal to the State Government, Degema Government Area  and well meaning individuals to assist the team,  saying that is a way of empowering the youth in the state.

Waldrum Commends NFF As Falcons Round Off Camping