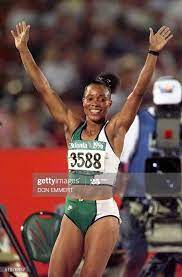 Nigeria’s Olympics golden girl, Chioma Ajunwa, is planning big and she has concluded arrangements to drag the likes of former President, Olusegun Obasanjo, Imo State Governor, Hope Uzodinma and Sports Minister, Sunday Dare to Lagos this week.
Ajunwa, a top police officer, plans to launch a sports development centre where the nation’s future stars would be nurtured to stardom.
According to Prince Henry Amike, who is heading the planning committee, former President Olusegun Obasanjo and Governors Babajide Sanwo-Olu ((Lagos), Hope Uzodinma (Imo) and Sports Minister, Sunday Dare top the list of high profile dignitaries that would grace the launch billed for the Muson Centre, Onikan, Lagos on Friday.
Amike disclosed that Mrs Josephine Anenih would play the role of Mother of the Day, while Oba Alayeluwa Saheed Ademola Elegushi (Kusenla 111), the Elegushi of Ikate-Elegushi Kingdom would be the Royal Father of the day.