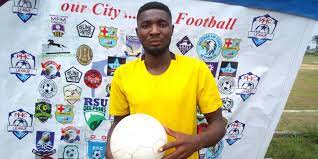 Port Harcourt Football Academy, (PHFA), has emerged  winners  of this year’s Port Harcourt City Football League (PHCFL),  after they defeated high rated SKE FC of Port Harcourt 2-0, at the Sharks Football Stadium in Port Harcourt, on Sunday.
Speaking with sports journalists shortly after the match the Head Coach of PHFA, Edoardo Cavallone, expressed joy as they won the league, adding that his boys (players) were impressive and awesome in the tournament.
According to him, his players deserved  to win the league title  because they  were outstanding  through-out the competition, besides,  they did not lose any of their games.
“I commend my players because they performed impressively, if they continue playing in this form they  will become world class players in future” Cavallone said.
He described SKE FC as a good side, but his players did not give them any chances during the match.
“I want to commend the organisers  of the tournament,  they actually tried their best, I think by next season there will be  some level of improvement” he stated.
Also speaking, the Head Coach of SKE FC, Ifeanyi Nwakwuku said, to lose a match was part of the game,   adding that both teams played  very interesting game.
He expressed happiness for PHFA for winning the league in spite the fact that they lost.