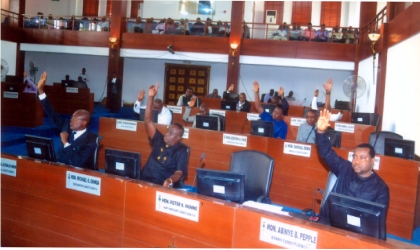 The lawmaker representing Etinan Federal Constituency at the House of Representatives, Mr Onofiok Luke, said in Uyo yesterday that for the country to develop and make progress issues of national interests required bipartisan approach.
Luke told newsmen that critics, who believed that as a PDP member, he should oppose issues brought to the House by the ruling APC every time did not mean well for the country.
He said that as politician with integrity, he remained a loyal member of the PDP, but must debate national issues dispassionately and without political bias.
“I am a man who stands by what he believes. I believe I have demonstrated discipline in my political sojourn and will not compromise it now when I am getting towards the curve of my political journey.
“What my critics don’t understand is that at the national level, bipartisan approach to governance is essential if not pivotal.
“Your ability to coalesce the inputs of various stakeholders, regardless of party affiliations to drive home the interest of your constituency is a necessary survival instinct.
“You cannot be defining PDP/APC when there are pressing topical national issues seeking attention and legislations. Acknowledging this shouldn’t suddenly make you disloyal to your party.
“Today, with this bipartisan approach to politics, I have advocated the granting of license for the operation of Ibom Deep Seaport, reviving of Aluminium Smelter Company in Ikot Abasi, and the creation of a division of the Court of Appeal in Uyo,’’ Luke said.
Luke, a former Speaker at the Akwa Ibom House of Assembly and member representing Etinan, Nsit Ibom and Nsit Ubium in the House of Representative, said he would remain the voice of the people.
He said that within his short period of stay at the National Assembly, he had sponsored 14 Bills and four motions that would be beneficial to the people.
The lawmaker said he also advocated for several issues that would advance Akwa Ibom and Nigeria as a nation.
“When we began our campaign for the House of Representatives, we drove with the mantra: `A voice to speak and a heart to give back.’ ‘’ Seventeen months on this project, I’ll leave you with the privilege of evaluating me, if I have truly lived to the principles of my campaign poetry.
“Worried by the slow pace of justice dispensation, I have championed the course of speedy dispensation of justice in Nigeria. In a manner of a motion, I called for more justices to be appointed to the Supreme Court. Today, more justices have been appointed to the Supreme Court.
“I have spoken for the welfare of judicial officers and increased security around judges in the country.  My belief is that, if these judges feel insecure or suffer kidnap, they may be afraid to dispense justice,’’ he said.
Luke said he had also attracted 10 projects to his constituency since he got to the House of Representatives in 2019. He added that six of the projects had been executed while others would be delivered within the timeframe given.
He solicited for continuous support of his constituents to enable him to perform better and to provide more dividends of democracy to the people.